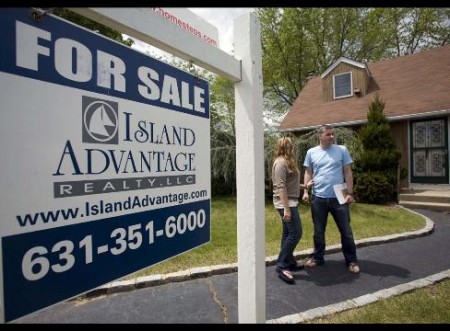 July 10 (Bloomberg) — U.S. foreclosure filings rose 53 percent in June from a year earlier and bank repossessions increased the most since RealtyTrac Inc. began collecting data in January 2005 as deteriorating property values forced more people to give up their homes.

One in every 501 U.S. households either lost the home to foreclosure, received a default notice or was warned of a pending auction, RealtyTrac, an Irvine, California-based seller of default data, said today in a statement. Bank seizures rose 171 percent.

“The foreclosure problem is getting worse and will stay with us well into the next decade,” Mark Zandi, chief economist for Moody’s Economy.com in West Chester, Pennsylvania, said in an interview. “The job market is eroding and homeowners have less equity. Lenders are much less willing to work with you if you’ve got negative equity, and you’re more likely to give up your house if you’re deeply underwater.”

Foreclosure activity is the highest since the Great Depression of the 1930s, said Rick Sharga, RealtyTrac’s vice president of marketing. Home prices, which fell the most on record in April, according to the S&P/Case-Shiller index of 20 U.S. metropolitan areas, have created a cycle where shrinking equity drives homeowners into foreclosure, which in turn further pushes down home prices, Sharga said.

“We’ll have 1 million bank-owned properties by the end of the year,” Sharga said in an interview. “That will represent between one-fourth and one-third of all home sales.”

About 53 percent of borrowers with subprime loans, those with poor or incomplete credit histories, will have negative equity in their homes at the end of the year, and the number will rise to 63 percent in 2009, New York-based analysts at Credit Suisse led by Rod Dubitsky said in an April 23 report.

About $3.5 trillion in homeowner equity has been wiped out since the spring of 2006, when housing prices were at their peak, Zandi said.

Rising mortgage defaults and auctions of foreclosed properties are adding to a glut of unsold homes and prolonging the housing slump. Efforts by the U.S. Congress to insure as much as $300 billion in refinanced mortgages and save up to 2 million borrowers from foreclosure can work only by “slowing down or reversing home price declines and equity deterioration,” Credit Suisse said.

Nevada had the highest foreclosure rate for the 18th consecutive month. One in every 122 households was in some stage of foreclosure, more than four times the national average, and 3,133 properties in the state were seized by lenders, said RealtyTrac. The company has a database of more than 1.5 million properties and monitors foreclosure filings including default notices, auction notices and bank seizures.

California had seven of the 10 U.S. metro areas with the highest rates, including the top three. Stockton, in the state’s central valley, was first with one in every 72 households in a stage of foreclosure, followed by Merced, about 110 miles east of San Francisco, with one in 77 households, and Modesto, near the Sierra Nevada mountains, with one in 86 households. Riverside-San Bernardino ranked fifth, Vallejo-Fairfield was seventh, Bakersfield was eighth and Salinas-Monterey was tenth.

“The housing beyond the sprawl is going to suffer another serious leg down because of high oil prices,” Peter Navarro, professor of economics and public policy at the University of California at Irvine, said in an interview. “A lot of people went out there to get cheaper homes, but this is going to take a big bite out of their mortgage.”

California had the most total filings for the 18th consecutive month, increasing 77 percent in June from a year earlier to 68,666. Florida was second at 40,351 filings, an increase of 92 percent, and Ohio was third at 13,194, an increase of 11 percent.

New York filings increased 22 percent from a year earlier to 5,367, with one in every 1,473 households in a stage of foreclosure, the 32nd highest rate.

New Jersey filings rose 5 percent. The state had one in every 695 households in a stage of foreclosure, the 14th highest rate.

Filings fell 3 percent from May.

“May was the highest month we’ve ever recorded, so a little bit of a drop off was inevitable,” Sharga said.