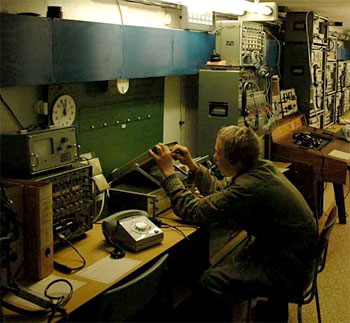 The “suggested duties” of these Terrorism Liaison Officers include: “source person for internal or external inquiry,” and “collecting, reporting retrieving and sharing of materials related to terrorism. Such materials might include … books journals, periodicals, and videotapes.” Photo: Stasi operative from the German film, The Lives of Others.

The full scale of Bush’s assault on our civil liberties may not be known until years after he’s left office.

At the moment, all we can do is get glimpses here or there of what’s going on.

And the latest one to come to my attention is the dispatching of police officers, firefighters, paramedics, and utility workers as so-called “terrorism liaison officers,” according to a report by Bruce Finley in the Denver Post.

They are entrusted with hunting for “suspicious activity,” and then they report their findings, which end up in secret government databases.

What constitutes “suspicious activity,” of course, is in the eye of the beholder. But a draft Justice Department memo on the subject says that such things as “taking photos of no apparent aesthetic value” or “making notes” could constitute suspicious activity, Finley wrote.

The states where this is going on include: Arizona, California, Colorado, Florida, Illinois, Tennessee, Wisconsin, and Washington, D.C.

Dozens more are planning to do so, Finley reports.

Colorado alone has 181 Terrorism Liaison Officers, and some of them are from the private sector, such as Xcel Energy.

Mark Silverstein of the Colorado ACLU told Amy Goodman of Democracy Now! that this reminds him of the old TIPS program, which “caused so much controversy that Congress eventually shut it down. But it is reemerging in other forms.” Silverstein warns that there will be thousands and thousands of “completely innocent people going about completely innocent and legal activities” who are going to end up in a government database.

On the web, I found a description for a Terrorism Liaison Officer Position in the East Bay.

Reporting to the Alameda and Contra Costa Counties and the city of Oakland, these officers “would in effect function as ad hoc members” of the East Bay Terrorism Early Warning Group, which consists of local police officers and firefighters.

The “suggested duties” of these Terrorism Liaison Officers include: “source person for internal or external inquiry,” and “collecting, reporting retrieving and sharing of materials related to terrorism. Such materials might include … books journals, periodicals, and videotapes.”

Terrorism Liaison Officers would be situated not only in agencies dealing with the harbor, the airports, and the railroads, but also “University/Campus.”

And the private sector would be involved, too. “The program would eventually be expanded to include Health Care personnel and representatives from private, critical infrastructure entities, with communication systems specifically tailored to their needs.”

In this regard, Terrorism Liaison Officers resemble InfraGard members. (See “The FBI Deputizes Business“.) This FBI-private sector liaison group now consists of more than 26,000 members, who have their own secure channels of communication and are shielded, as much as possible, from scrutiny.

Terrorism Liaison Officers connect up with so-called “Fusion Centers”: intelligence sharing among public safety agencies as well as the private sector. The Department of Justice has come up with “Fusion Center Guidelines” that discuss the role of private sector participants.

“The private sector can offer fusion centers a variety of resources,” it says, including “suspicious incidents and activity information.”

It also recommends shielding the private sector. “To aid in sharing this sensitive information, a Non-Disclosure Agreement may be used. The NDA provides private sector entities an additional layer of security, ensuring the security of private sector proprietary information and trade secrets,” the document states.

As if that’s not enough, the Justice Department document recommends that “fusion centers and their leadership encourage appropriate policymakers to legislate the protection of private sector data provided to fusion centers.”