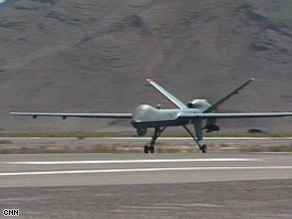 The Air Force’s new unmanned bomber, the “Reaper,” commutes from Nevada to Afghanistan.

CREECH AIR FORCE BASE, Nevada (CNN) — From a desert outpost northwest of Las Vegas, elite fighter pilots journey to a war zone in Afghanistan, some 7,500 miles away.

It might be the world’s longest commute, except that these armchair pilots at Creech Air Force Base in Nevada never leave the air-conditioned comfort of their command center.

This is the future of aerial combat.

Sitting in a virtual cockpit is not as exciting as flying a fighter jet, but unmanned attack-plane pilots can enjoy a normal workday schedule — more or less.

“Seeing bad guys on the screen and watching them possibly get dispatched, and then going down to the Taco Bell for lunch, it’s kind of surreal,” says Captain Matt Dean.

The original drone was the “Predator,” armed with a pair of Hellfire missiles. It was followed by its bigger and far more lethal cousin, “the Reaper,” which carries four times as much firepower. The Reaper can carry the same bomb load as an F-16 fighter plane, but its pilots are not put in harm’s way.

The Air Force once employed jerry-rigged missiles strapped to unmanned spy planes. Now military commanders see remotely piloted aircraft as the model for the way future wars will be fought.

For over a year, Reapers have been flying two separate round-the-clock patrols over eastern Afghanistan, controlled from the Creech AFB command center, which has been strictly off-limits to the media until now.

Reaper pilots so far this year have launched 64 missiles and dropped seven 500-pound bombs in Afghanistan.

Originally a spy plane, the Predator was converted to a strike aircraft shortly after the September 11, 2001, attacks on the Pentagon and World Trade Center. Air Force technicians strapped two Hellfire missiles — one under each wing — and turned the unarmed “surveillance platform” into a remote-controlled killing machine.

By the weekend following September 11, the Predator’s operators believe they had Taliban leader Mullah Omar in their sights, but never got the authorization to pull the trigger.

Nonetheless, from that experience a new strategy was born — one of employing an increasing fleet of armed, unmanned aircraft. Unmanned spy planes have always provided an unblinking eye in the sky, but now they offer untiring combat capability, too.

The pilots stay safe and rotate in shifts to prevent fatigue, guiding incredibly lightweight planes that can stay aloft for more than a day at a time. Even after some 30 hours of flying time, upkeep of UAVs is minimal when compared with that of F-16s.

“Sometimes it’s a matter of putting gas in it and it goes right back up,” says Master Sgt. Aaron Hauser, who oversees daily maintenance of the Predator fleet at Creech. “It’s a far simpler aircraft to maintain, and that’s the whole point.”

The success of this new concept of aerial power has created a huge demand for the aircraft. Every commander wants one, but there aren’t nearly enough to go around.

But not for long: the Air Force is shifting its budget toward buying dozens more remote-controlled killer Reapers.