Meet the next President of the United States (Barack Obama). 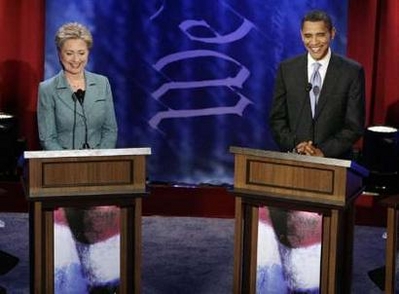 By the time we all heard about it the unscheduled stop that the campaign plane of Sen. Barack Obama, D-Illinois, made in St. Louis yesterday was ultimately uneventful. But the incident was quite dicey there for a spell.

As the pilot struggled to re-gain control of the pitch of the plane – the angle of the nose of the plane – Obama was told that he and the other 44 passengers on board might have to assume the brace position upon landing, bending forward with their heads between their knees.

That ultimately did not happen, but National Transportation Safety Board chairman Mark Rosenker told ABC News’ Dennis Powell yesterday that the incident “is extremely serious in this particular case.”

An inflatable slide in the tail cone of the plane had deployed, making control of the plane tough. “There are hydraulic lines back there,” Rosenker says. ‘There are control cables that deal with the elevators and other area’s of control surfaces for the aircraft, and could potentially make it extremely difficult if not impossible to fly the aircraft.”

Three fire trucks met the plane on the tarmac in St. Louis. Obama called his wife Michelle to let her know he was fine before she saw anything on TV about the plane’s unscheduled landing. The plane was supposed to land in Charlotte, NC.

This was not Obama’s regular campaign plane, which is being overhauled. It was a loaner, having previously been used by Sen. Hillary Clinton, D-NY.