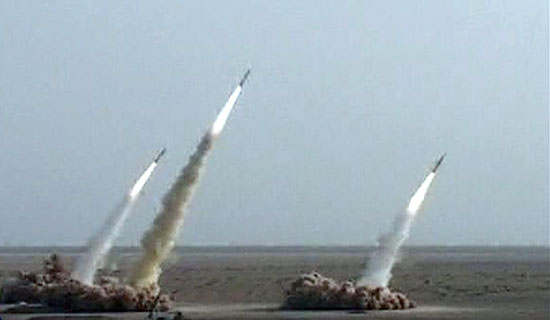 A video grab from Al Alam television showing three of nine missiles being fired during a test in Iran on Wednesday. (Iran television via Reuters)

PARIS: One day after threatening to strike Israeli and U.S. interests if attacked, the Iranian Revolutionary Guards were reported Wednesday to have test-fired nine missiles, including one that Tehran claims has the range to reach Israel.

State-run media, quoted by Western news agencies, said the tests near the Strait of Hormuz included long- and medium-range missiles, among them a new version of the Shahab-3, which Tehran maintains can hit targets 2,000 kilometers, or 1,250 miles, away.

The reported tests coincide with increasingly tense negotiations over Tehran’s nuclear program, which Iran says is for civilian purposes but which many Western governments suspect is meant for building nuclear weapons.

At the same time, U.S. and British warships have been conducting naval maneuvers in the Gulf – apparently within range of the launch site of the missiles tested Wednesday.

Israel insisted it did not want war with Iran. “Israel has no desire for conflict or hostilities with Iran,” said Mark Regev, a spokesman for Prime Minister Ehud Olmert. “But the Iranian nuclear program and the Iranian ballistic missile program must be of grave concern to the entire international community.”The missile tests drew a sharp response Wednesday from the United States.

Gordon Johndroe, the deputy White House press secretary, said in a statement at the Group of 8 summit meeting in Japan that Iran’s development of ballistic missiles was a violation of United Nations Security Council resolutions.

“The Iranian regime only furthers the isolation of the Iranian people from the international community when it engages in this sort of activity,” Johndroe said.

He urged Iran to “refrain from further missile tests if they truly seek to gain the trust of the world. The Iranians should stop the development of ballistic missiles which could be used as a delivery vehicle for a potential nuclear weapon immediately.”

The missile tests were reported after the Group of 8 leaders urged Iran to suspend uranium enrichment. Moreover, Iran displayed its military capability just a day after the United States and the Czech Republic signed an accord to allow the Pentagon to deploy part of its controversial ballistic missile shield, which Washington maintains is designed in part to protect against Iranian missiles.

Press TV, the 24-hour English-language Iranian satellite channel, showed what was said to be the Shahab-3 missile rising amid clouds of dust from a desert launch site Wednesday.

Hossein Salami, a commander of the Revolutionary Guards, was quoted as saying: “The aim of these war games is to show we are ready to defend the integrity of the Iranian nation.”

“Our missiles are ready for shooting at any place and any time, quickly and with accuracy,” he said. “The enemy must not repeat its mistakes. The enemy targets are under surveillance.”

The missile tests also followed remarks by a senior Iranian official who was quoted Tuesday as warning the United States against attacking Iran.

“In case that they commit such foolishness, Tel Aviv and the U.S. fleet in the Persian Gulf would be the first targets to burst into flames receiving Iran’s crushing response,” said Ali Shirazi, a representative of Ayatollah Ali Khamenei, Iran’s supreme leader, according to the Iranian news agency.

The Iranian news agency Fars has reported on recent military maneuvers by the Revolutionary Guards to improve “combat capability.”

However, the signals have not been universally hostile. Fars quoted Manouchehr Mottaki, the foreign minister of Iran, as saying that negotiations were in a “new environment.” He held out the possibility of improved relations with the United States, which have been tense and acrimonious since the Islamic revolution in 1979.