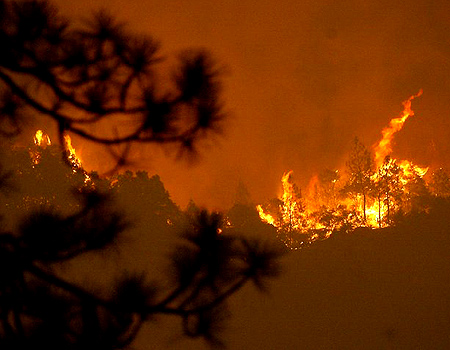 Authorities ordered residents of 3,200 homes in Paradise to evacuate their homes Tuesday after fire destroyed 40 houses in the nearby rural community of Concow. Evacuation orders also remained in place for 800 to 1,000 residents from Concow and Yankee Hill, about 85 miles north of Sacramento.

“Right now we’re battling the weather and the erratic winds,” said Todd Simmons, a California Department of Forestry and Fire Protection spokesman. “Whatever the winds are doing, that’s pretty much what the fire’s going to do.”

Firefighters also were struggling against a sudden drop in humidity and a spike in temperature as a heat wave forecast to linger until the weekend grips much of the state.About 30 lightning-sparked wildfires in Butte County, where Paradise and Concow are located, have charred 47,000 acres in recent weeks and was about 40 percent contained, officials said.

Fire crews across the state have been trying to cover hundreds of active California wildfires, many of which were ignited by a lightning storm more than two weeks ago. Some 1,450 fires had been contained late Tuesday, but more than 320 were still active, authorities said.

At a fire east of Bakersfield on Tuesday, wind gusts caused flames to jump fire lines and destroy or damage five residences and four more outbuildings in the Sequoia National Forest.

A blaze threatening the small coastal community of Big Sur let up just enough to allow hundreds of people to check on their homes Tuesday. Authorities announced that more residents would be allowed to return Wednesday morning.

At least 23 homes and 25 other structures have been destroyed in Big Sur as flames marched over more than 125 square miles of land since June 21.

Although that fire is far from controlled – the rugged terrain has kept containment at 23 percent into the fire’s third week – authorities lifted the mandatory evacuation order issued for 25 miles of the 31-mile stretch along the Pacific Coast Highway that had been closed.

Many of the 1,500 evacuated residents of Big Sur headed home Tuesday morning through smoke and ash, anxious to gauge the damage. Officials, however, cautioned that the lifted evacuation orders did not mean conditions had drastically improved.

A wildfire in the Los Padres National Forest near Santa Barbara grew slightly to 9,785 acres, or about 15 square miles, but the number of homes threatened dropped sharply Tuesday as crews secured fire lines near populated areas.

The blaze continues to threaten about 250 homes, down from a peak of more than 3,000. The fire is 55 percent contained, said U.S. Forest Service spokeswoman Debbie Becker.

“It’s going according to plan,” Becker said “They’ve really got a good hold on this fire but there’s still a lot of potential to get worse.”

The expected heat wave raised not only the fire danger, but also concerns about heat illness among firefighters worn down by the long fight against blazes that have consumed more than 985 square miles in California since late June.

“We do have a lot of fatigue because of the low numbers of resources in the state,” said Thom Walsh, a Forest Service resource unit leader.

Crews took rest breaks in refrigerated trailers with bunk beds before returning to the field, but heat stroke was a worry, Walsh said.

Highs are likely to be in the triple digits across much of the northern half of the state until at least Friday, National Weather Service forecaster Christine Riley said.

Temperature records for the date were broken in five cities Tuesday. Among them were Sacramento, where the temperature reached 108 Fahrenheit, breaking the previous high of 104 degrees set in 1997. Stockton recorded 105 F and Modesto 107 F, both breaking records for July 8 set in 2006.

Despite the soaring temperatures, California’s power grid was able to handle the energy demand, said Kristina Osborn, a spokeswoman for the California Independent System Operator, the agency that monitors the state’s power grid.

Smoke from the wildfires could help keep temperatures a few degrees lower in some areas, even as it increases health risks. At night, the smoke acts like a blanket, holding in the heat, said National Weather Service forecaster George Cline.

State agencies were prepared to open cooling centers if needed. Officials also were checking regularly for heat problems at hospitals and centers serving the elderly and those with disabilities.