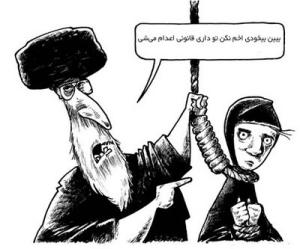 Iranian legislation seeks to K-line bloggers from the real world

A draft bill in the Iranian parliament is set to give bloggers the death penalty, if the government deems their writing as advocating corruption, prostitution, or desertion of Islam.

If so classified, bloggers will join those guilty of the above crimes in the real world to be branded as mohareb (an enemy of God) and “corrupt of the earth” – making him or her eligible for punishments ranging from exile, to amputations, to execution.

Further, if the bill becomes law, punishment bestowed by the system “cannot be commuted, suspended, or changed.”

Iranian bloggers and human rights activists fear the ease in which the government could casually accuse bloggers of offending the country’s strict interpretation of Islamic law.

Anti-censorship activist group Global Voice Online notes that about 18 months ago the Iranian government demanded bloggers register their websites, although the initiative failed to produce meaningful results. Bloggers widely considered registration as an enabler for future government suppression, and many proudly displayed an “I do not register my blog/site” badge in defiance of the mandate.

“Mentioning ‘blogging’ among crimes such as kidnapping, raping, armed robbery makes accusing bloggers easier than before… Such a law will harm the mental security of society more than the poor bloggers, who do not know what awaits them,” said Iranian blogger Mojtaba Saminejad. According to a Wikipedia bio linked by his “About Me” page, Saminejad spent 21 months in an Iranian prison beginning in 2005, including an alleged 88 days of solitary confinement and torture, due to a 2004 post reporting the arrest of three other bloggers. His official charges listed Saminejad as having insulted Iran’s head of state and “endangering national security.”

Another Iranian blogger notes that Iranian Parliament president Ali Larijani said the bill was discussed for “hours” with the country’s Judiciary before a draft was settled. After the number of executions last year almost doubled, from 177 to 317 according to Amnesty International, the Iranian government said the punishment is not given casually, and results only after an extensive legal process.

A censored version of the internet sees wide use in Iran, and young, tech-savvy Iranians have joined the rest of the world in blogging about everything from menial personal gossip to obscenities and questioning the government. The Iranian government actively filters out content it considers obscene, including websites promoting pornography, heresy, or political dissent.

The Iranian government considers blogging a threat to “mental security,” a doctrine that human rights advocates consider to be a scapegoat used in the government’s historically oppressive policies. It joins a variety of other countries, including Yemen and China, in monitoring online expression for politically and morally sensitive material.

The draft bill still needs inspection from the Guardian Council, which ensures the bills’ adherence to the Iranian constitution and Islamic law, and then needs to be “rubber-stamped” by a conservative government watchdog before being made into law.