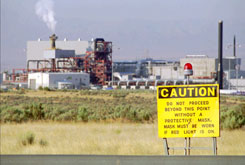 WASHINGTON – The Pentagon is considering a plan to ship deadly chemical weapons to military sites in four states to accelerate the destruction of the munitions, a new report to Congress says.

The idea of transporting such lethal agents along routes such as from Colorado to Oregon is prompting opposition from Congress and watchdog groups.

They say the plan exposes the American public to unnecessary risks as the U.S. government is concerned about terrorist attacks.

To honor a 1997 treaty banning chemical weapons, Congress has ordered the military to destroy all its munitions by the end of 2017.

In an unpublicized report delivered to lawmakers last week, the Pentagon said it probably could not meet that deadline unless it ships nerve agents and mustard gas to additional sites for destruction.

Even adding more people and working around the clock at the two sites with complicated dismantling requirements in Kentucky and Colorado may not help the military meet the 2017 deadline, the report said.

Work would be speeded up if some weapons at Kentucky’s Blue Grass Army Depot are moved to sites in Alabama and Arkansas, the report said, while some at the Pueblo, Colo., site are sent to Utah and Oregon.

Congress would have to change laws that forbid moving the weapons, the report said.

That prospect is uncertain. While chemical weapons have been destroyed safely at the Anniston Army Depot in Alabama, it is too risky to ship more there, Sen. Richard Shelby, R-Ala., said in a statement.

“It’s shocking and irresponsible for the Department of Defense to even propose to ship large volumes of weapons of mass destruction across the highways of the United States considering the risks and atmosphere of terrorist threats,” said Craig Williams, director of the Chemical Weapons Working Group, a Kentucky citizens organization.

Pentagon officials have no preferred option to meet the congressional mandate to destroy all weapons by 2017, said spokesman Chris Isleib. The United States has already said it would miss the 2012 deadline set by the international Chemical Weapons Convention.

Kevin Flamm, the Pentagon’s manager for plans to eliminate weapons in Colorado and Kentucky, said he had focused on speeding up weapons destruction by adding workers and operating around the clock. That, he said, would finish destruction in Colorado by 2017 but probably not in Kentucky.