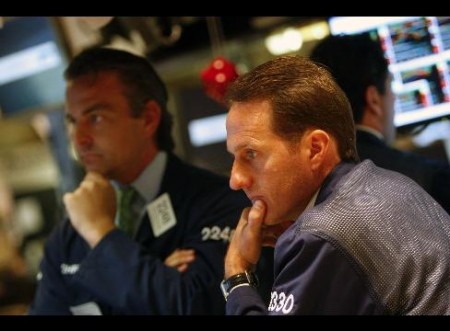 General Motors Corp., the largest U.S. automaker, plunged the most in three years as Goldman Sachs Group Inc. advised selling the stock and crude rose by $5 a barrel. Citigroup Inc. led the KBW Bank Index to an almost 10-year low as Goldman said the lender may report an $8.9 billion second-quarter charge and cut its dividend. Research In Motion Ltd., maker of the BlackBerry, posted its biggest drop since 2001 on concern competition with Apple Inc.‘s iPhone is reducing earnings.

“Most investors are going to sit on the sidelines until they’re more certain the sharks have left the waters and it’s safe to go back in,” said Bruce McCain, the Cleveland-based head of investment strategy at Key Private Bank, which oversees about $30 billion. “The write-offs have been far worse than anyone would have imagined.”

All 10 industry groups in the S&P 500 retreated at least 1 percent as Nike Inc. said U.S. earnings dropped and Oracle Corp. predicted the slowest sales growth since 2006, adding to concern that consumers and businesses are cutting back as the economy expands at the weakest pace in five years.

Earnings at companies in the S&P 500 slid 18 percent on average in the first quarter, the third straight retreat, according to data compiled by Bloomberg. Analysts project profits will drop 8.9 percent this quarter, according to a Bloomberg survey last week.

The Dow has slumped 9.4 percent this month, its worst June since an 18 percent tumble in 1930 during the Great Depression. All 30 companies have posted losses in the month as oil surged, the unemployment rate jumped to the highest since 2004 and concern grew that global financial firms will add to $400 billion of subprime-related writedowns.

The Dow’s retreat today erased all the gains since mid- March that were spurred by JPMorgan Chase & Co.’s rescue of Bear Stearns Cos., a drop in the Federal Reserve’s benchmark interest rate to 2 percent and the central bank’s new lending programs for securities firms.

Citigroup dropped $1.18, or 6.3 percent, to $17.67 today, the lowest level since October 1998. Goldman added the biggest U.S. lender by assets to its “conviction sell” list and lowered its recommendation on U.S. brokerages to “neutral” from “attractive,” saying the pace of deterioration in the industry “appears to be far worse than” it originally anticipated.

Merrill Lynch & Co., the third-largest U.S. securities firm, declined $2.41 to $33.05, a five-year low. Goldman analysts predicted the company will post a $3.55-a-share loss in 2008, compared with their previous estimate for an 8-cent profit.

The Financial Select Sector SPDR Fund, a so-called exchange traded fund that tracks U.S. financial stocks, lost 3.6 percent to $20.90, the lowest since March 2003. The shares, known by their XLF ticker, were the fourth most-traded among stocks and ETFs in New York today. The KBW Bank Index of 24 companies dropped 3.9 percent to 60.20, the lowest since October 1998.

“It’s another ugly day,” said James Dunigan, the Philadelphia-based chief investment officer at PNC Advisors, which manages $70 billion. “Until we get through another round of disclosures and through earnings season, the safest place is on the sidelines.”

Research In Motion plunged $18.88, or 13 percent, to $123.46. Second-quarter earnings will be as low as 84 cents a share, the company said. That missed the average prediction by analysts of 92 cents, according to a Bloomberg survey. The report marked Research In Motion’s first earnings disappointment in five quarters.

Chrysler spokesman Dave Elshoff said in an interview today that the company has no plans to file for bankruptcy, countering speculation in financial markets.

Companies in the S&P 500 that rely on discretionary consumer spending lost 3.5 percent as a group after oil prices jumped to $139.64 a barrel on Libya’s threat to cut production and OPEC’s prediction that prices may reach $170 by the summer.

Oracle slipped $1.13 to $21.42. The world’s second-largest software maker expects first-quarter profit before some items of 26 cents to 27 cents a share. Analysts predicted 27 cents, according to the average of 16 estimates in a Bloomberg survey. Sales will rise between 18 percent and 20 percent, Oracle said.

Lennar Corp. spurred declines in homebuilders after the company reported a loss that exceeded analysts’ estimates as it cut prices to attract buyers. The shares fell $1.23, or 8.4 percent, to $13.34. The S&P Supercomposite Homebuilding Index lost 5.6 percent as all 15 of its companies retreated.

The VIX, as the Chicago Board Options Exchange Volatility Index is known, climbed for the first time this week, gaining 13 percent to 23.93. The index, which measures the cost of using options as insurance against declines in the S&P 500, reached the highest level since June 11. The VIX is still 26 percent below its five-year closing high in March.

The U.S. economy expanded at an annual rate of 1 percent in the first quarter, capping the weakest six months of growth in five years, the Commerce Department said today. The revised gain in gross domestic product was up from a preliminary estimate of 0.9 percent issued last month.

Initial jobless claims totaled 384,000 in the week ended June 21, unchanged from the previous week’s tally that was higher than previously estimated, the Labor Department said. The total number of people collecting benefits rose by 82,000 to 3.139 million in the week ended June 14, the highest since February 2004.

Bed Bath & Beyond Inc. climbed $1.22, or 4.3 percent, to $29.79 for the top gain in the S&P 500. The largest U.S. home- furnishings retailer reported profit that fell less than analysts estimated because of higher sales.

Treasuries rose on speculation credit-market losses will prevent the Fed from increasing borrowing costs later this year. The dollar declined to the weakest level against the euro in more than two weeks.

“It’s the end of the quarter, oil is up and you’ve got a continued bashing of financials,” said David Heupel, who helps oversee about $60 billion as a portfolio manager at Thrivent Financial for Lutherans in Minneapolis. “Plenty of fuel for the fire today.”

To contact the reporter on this story: Michael Patterson in New York at mpatterson10@bloomberg.net.