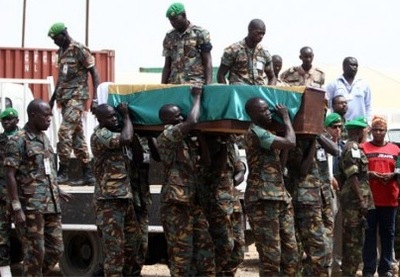 Environmental groups have been warning for years that tense parts of the world could get even worse with the advent of global climate change, and even spark whole new conflicts. Now, the nation’s spies are saying pretty much the same thing.

The U.S. intelligence community has finished up its classified assessment of how our changing weather patterns could contribute to “political instability around the world, the collapse of governments and the creation of terrorist safe havens,” Inside Defense reports. Congress was briefed on the report last week. And on Wednesday, leading spies — including National Intelligence Council chairman Dr. Thomas Fingar and Energy Department intelligence chief Rolf Mowatt-Larsen — will testify on the Hill about the 58-page document, “The National Security Implications of Global Climate Change Through 2030.”

In addition to examining how weather could add stress to governments with a weak grip on power … the authors mulled a spectrum of second- and third-order consequences for Washington policymakers to consider — including indirect security concerns like impacts on economies, energy, social unrest and migration.

Foreign-policy concerns were also weighed, including how flooding, rising water levels or drought might create humanitarian crises. Also examined was how extreme weather events could challenge the response capabilities of governments around the world.

“Climate change is a threat multiplier in the world’s most unstable regions,” a source familiar with the document tells Danger Room. “It’s like a match to the tinder.” Just think about the fights over water already under way in the Middle East and Africa, or the tensions exacerbated by the hurricanes and tsunamis in Asia.

The document was originally supposed to be unclassified. But then the policy recommendations — and warnings about trouble spots — got more and more detailed.

Richard Engel, deputy national intelligence officer for science and technology … said in a little-noticed speech last month at the University of Delaware that if the findings of the assessment were made public, “It would frustrate the execution of U.S. foreign policy.”

“We wanted to get down to something that might be actionable for the policy community,” Engel, a former Air Force major general and test pilot, said. “So we had to be very specific.”

“Generally, the Earth’s climate is changing, it has always been changing, so that’s not anything but a blinding flash of the obvious,” Engel added. “We really want to understand extreme weather events because they are very important as they potentially put at risk the infrastructure.”

The assessment is stamped “confidential,” the lowest level of classification. And our source says that Fingar & Co. is promising that nearly all of the document will come out in Wednesday’s hearing, before a joint session of the House Select Committee on Energy Independence and Global Warming and the Intelligence Community Management Subcommittee. Also testifying are former British Foreign Minister Margaret Beckett, retired Admiral Paul Gaffney and the Army War College’s Kent Hughes Butts, all of whom have previously raised alarms about climate change’s strategic impact. Lee Lane, with the American Enterprise Institute, has been pushing the issue of “geoengineering” in response to global warming. And Marlo Lewis, with the Competitive Enterprise Institute, calls the whole thing a “myth.”

Lewis’ presence before the panel may be a bit of a sop for the Republicans on the Intelligence Committee, many of whom opposed the idea of using the nation’s spies to investigate these issues at all.

But the nation’s military leadership, at least, is paying closer attention. “Climate change and other projected trends will compound already difficult conditions in many developing countries. These trends will increase the likelihood of humanitarian crises, the potential for epidemic diseases, and regionally destabilizing population migrations,” the Army says in its 2008 posture statement.