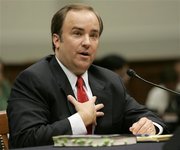 WASHINGTON – Former presidential spokesman Scott McClellan on Friday said President Bush has lost the public’s trust by failing to open up about his administration’s mistakes and backtracking on a promise to tell all about the leak of CIA operative Valerie Plame’s identity.

“This White House promised or assured the American people that at some point when this was behind us they would talk publicly about it. And they have refused to,” McClellan told the House Judiciary Committee. “And that’s why I think more than any other reason we are here today and the suspicion still remains.”

The former White House press secretary suggested that Bush could do much to redeem his credibility on the Plame matter and his reasons for going to war in Iraq if he would embrace “openness and candor and then constantly strive to build trust across the aisle.”

“This is a very secretive White House,” McClellan said. “There’s some things that they would prefer not to be talked about.”

The White House was dismissive of the event and McClellan himself. Presidential spokesman Tony Fratto disputed McClellan’s assertion that that Plame matter concluded with the conviction of I. Lewis “Scooter” Libby, citing an ongoing lawsuit by Plame and her husband, former ambassador Joseph Wilson, against current and former administration officials.

“The White House has the consistent position that we would refrain from comment while there was ongoing litigation,” Fratto said. “Scott must have forgotten the policy he repeatedly stated from the podium.”

McClellan cited other examples of Bush’s lack of candor, including what he called the “packaging” of intelligence to justify the Iraq war and the president’s handling of allegations that many years ago he used cocaine.

In his recently released book, “What Happened: Inside the Bush White House and Washington’s Culture of Deception,” McClellan recounts overhearing Bush on the telephone telling a supporter that “I honestly don’t remember whether I tried it or not.”

McClellan called that kind of response to sensitive questions by Bush and other politicians “essentially evasion.”

“That (approach) later transferred over to issues of policy,” McClellan said. “It tells something about his character.”

Bush’s spokesman from 2003-2006, McClellan said that former White House Chief of Staff Andy Card told him that the president and vice president wanted him to publicly say that Libby, Vice President Dick Cheney’s chief of staff at the time, was not involved in the leak.

“I was reluctant to do it,” McClellan said. “I got on the phone with Scooter Libby and asked him point-blank, ‘Were you involved in this in any way?’ And he assured me in unequivocal terms that he was not.”

In fact, both Libby and former presidential adviser Karl Rove had discussed Plame’s identity with reporters. Libby resigned from office the day he was indicted on charges of covering up the leak. Rove remained, eventually leaving office in August 2007. Rove has never been charged in the case.

Plame maintains the White House quietly outed her to reporters as retribution for criticism from her husband, former Ambassador Joseph Wilson, of Bush’s reasons for going to war in Iraq.

“My belief is … it was part of the effort to discredit Ambassador Wilson,” McClellan said.

Last July, Bush commuted Libby’s 2 1/2-year sentence, sparing him from serving any prison time. “It was special treatment,” McClellan said of the commutation.

McClellan told the House Judiciary Committee that he doesn’t know if a crime was committed and does not believe that Bush knew about or directed the leak. When asked about Cheney, he replied: “I do not know. There’s a lot of suspicion there.”

Bush backtracked on his promise of accountability in the Plame matter, McClellan said.

The White House had said in 2003 that anyone who leaked classified information in the case would be dismissed. Bush reiterated that promise in June 2004.

By July 2005, Bush qualified his position, saying he would fire anyone for leaking classified information if that person had “committed a crime.” He then commuted Libby’s sentence.

McClellan said the White House helped the Justice Department investigate the leak, but he knew of no internal White House probe to ferret out and fire the leaker.

Republicans cast his testimony as old news. Ranking Republican Lamar Smith of Texas questioned the impartiality of McClellan’s publisher and said that whatever McClellan had been instructed to say about the Plame affair was typical work of the White House press office.

“It should be of no surprise that there was spin in the White House Press Office,” said Smith. “What White House has not had a communications operation that advocates for its policies? Any recent administration that did not try to promote its priorities should be cited for dereliction of duty.”