‘Truth is treason in the empire of lies’ ‘Let the revolution begin!’ – Ron Paul 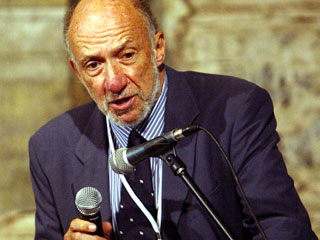 Critics are calling for the resignation of a U.N. official who publicly supports investigating theories that the Sept. 11 attacks on the World Trade Center and the Pentagon were an “inside job.”

But the former Princeton professor would also like to investigate whether “some sort of controlled explosion from within” destroyed the Twin Towers, he told FOXNews.com.

“I do think there are questions that haven’t been answered, questions about the way the buildings collapsed and the failure to heed a variety of signals that there was danger coming,” Falk said.

“I think [his beliefs are] fruitcake city, but among many delegations to the U.N. it’s probably the conventional wisdom,” said John Bolton, a former U.S. ambassador to the U.N. known for his straight talk on U.N. hypocrisy.

But Hillel Neuer, executive director of U.N. Watch, a non-governmental organization that monitors the U.N., wants Falk removed from his job.

“He should resign,” said Neuer, who raised concerns about Falk’s ability to be an objective observer. Neuer has also criticized Falk for being biased against Israel.

“If he were a principled person he would recognize the fact that he has very extreme views,” Neuer said.

In 2004, Falk wrote the forward to “The New Pearl Harbor: Disturbing Questions About the Bush Administration and 9/11,” a book written by David Ray Griffin, a Sept. 11 conspiracy theorist.

Griffin’s book argues that the Twin Towers may have been brought down by a “controlled demolition” – not by two airliners hijacked by Al Qaeda operatives – and that the Pentagon may not have been hit by a plane at all.

Griffin “doesn’t take a so-called conspiracy view and he raises questions that haven’t been answered,” Falk told FOXNews.com. “I think [the book] deserved to be published and I have no regrets about that.”

Falk said that while he supports alternative theories behind the World Trade Center attack, he doesn’t claim the U.S. government was responsible.

“I’m an agnostic on the issue,” he said.

But Bolton is hardly agnostic on the issue of Falk’s views.

“It’s just an example of the inmates running the asylum,” Bolton said. “It’s a particularly graphic example for Americans, but this is not an aberration – this is, unfortunately, typical of much of what goes on” at the U.N.

A spokesman for the office of Louise Arbour, the U.N. high commissioner for human rights, declined to comment on Falk.

“As a matter of practice, we do not offer commentaries on individual special rapporteurs,” wrote spokesman Rupert Colville in an e-mail to FOXNews.com. “There are some 27 of them in all, and if we started making character judgments on one or two of them, it would never stop. They are mandated to do their work by the Human Rights Council.”

But Falk’s support for Sept. 11 conspiracy theories isn’t the only thing that has critics up in arms.

In an online article for the Transnational Foundation for Peace and Future Research last year, Falk – prior to his appointment as an unbiased human rights investigator – compared Israeli actions in Gaza to the Nazi treatment of Jews. This may have led to his appointment as the rapporteur for the Palestinian territories, Bolton said.

“He was picked for a reason, and the reason is not to have an objective assessment – the objective is to find more ammunition to go after Israel,” Bolton said.

Neuer said Falk is not the only special rapporteur to bring a bias to the job. “You have people who are, I would say, a wolf in sheep’s clothing who are implementing the agenda of dictatorships,” he said.

“It’s tragic because there are human rights victims around the world who could greatly benefit from a champion, including in the Middle East. …

“Many of the rapporteurs do good work, do important work, report on how countries are respecting or not respecting laws around the world,” Neuer said.

Falk maintained he was an appropriate choice for the job. “I think I’m an informed observer and I’m unbiased in the sense that I have always done the best to tell the truth as I see it,” he said.

Despite his calls for Falk’s resignation, Neuer did not expect him to be censured or removed.

“I don’t think there’s going to be any move in the council to do anything about his appointment,” he said.

Falk, asked whether he’d be surprised if further investigations revealed the U.S. government’s role in Sept. 11, told FOXNews.com, “Yes, I’d be surprised – not shocked but surprised.”

He then reconsidered, and said: “No, I’d be shocked.”