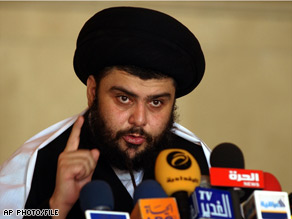 Al-Sadr is transitioning much of the rest of the Mehdi Army into a civilian movement dealing with “religious, social and cultural affairs,” according to the letter.

That part of the Mehdi Army will not be involved in militancy but will “fight the Western ideology and liberate the minds from domination and globalization.”

The letter said al-Sadr would disown anyone in the Mehdi Army who disobeys his new command. It was read at mosques affiliated with the cleric’s movement.

Iraqi and Western intelligence sources have said that Iran, over the last few months, has pressured al-Sadr to promote its interests, which include getting the United States out of Iraq.

Al-Sadr’s letter didn’t explain why he decided to issue his command.

Meanwhile, Iraqi officials, frustrated by the lack of success in negotiations with the United States over a long-term security agreement, are contemplating a new tack — pulling out of security talks and developing their own legislation that would dictate the shape of the American military presence in Iraq.

The talks have sparked concern among Iraqis that a bilateral security pact will compromise their country’s sovereignty.

The United States has said it hopes to secure a status of forces agreement by the end of July. At present, a U.N. mandate governs the American military presence through the end of the year.