Top Federal Reserve officials on Tuesday hammered home the U.S. central bank’s determination not to allow inflation to get out of control, cementing views that interest rates will rise later this year. 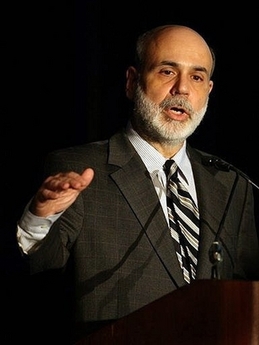 The remarks by two regional Fed presidents followed hard-line comments on Monday from Fed Chairman Ben Bernanke that the U.S. central bank would “strongly resist” any deterioration in inflation expectations. Analysts and markets viewed the comments as a sign the Fed — like other central banks — was turning its sights on inflation.
(It’s sometimes very enlightening to have a closer look at ones own creations. – The Infinite Unknown)

Dallas Federal Reserve Bank President Richard Fisher, who solidified a reputation as one of the most hawkish members on the Fed’s interest rate-setting Federal Open Market Committee with three dissents against steep rate cuts, echoed Bernanke.

“We want to make sure the message is clear … that we will not countenance building inflationary expectations,” he told the Council on Foreign Relations in New York.

“The effects of significant increases in food and energy prices are still feeding through the economy, as are the impacts of appropriately aggressive monetary and fiscal policy responses to the recent financial turmoil,” he said in a speech at a conference on Cape Cod hosted by the Boston Fed.

The comments suggest concern over inflation is on the rise at the Fed, as it is at many central banks around the globe.

The Bank of Canada surprised markets on Tuesday as it held rates steady and signaled an end to its rate-cutting cycle. On Saturday, the People’s Bank of China raised bank reserve requirements to try to squeeze inflation out of its economy; and last week European Central Bank chief Jean-Claude Trichet said the ECB may need to raise rates as soon as next month.

The remarks from Fed officials helped tilt odds in financial futures markets to an 80 percent likelihood that the U.S. central bank will hike benchmark overnight rates by a quarter percentage point, to 2.25 percent, at a meeting in September. Investors see rates at 3 percent by next March.

The Fed slashed borrowing costs aggressively to shield the U.S. economy from a housing crisis after the collapse of the subprime mortgage market last year, which sparked a global credit crunch that has chilled U.S. growth.

Fisher said he wanted to draw the line at 3.5 percent for benchmark rates and made plain that recent signals on inflation expectations were causing him some concern.

“The anecdotal evidence, the headlines that we’re reading in the newspapers, and the survey data, is not encouraging,” he told his audience in response to a question.

“So you want to make sure that is not encouraged and we will do the level best we can to do so,” he said.

MORE THAN A PAUSE?

The Fed’s last rate cut was accompanied by a statement clearly hinting that the easing campaign had been paused while policy-makers waited for the benefits of lower borrowing costs to filter through into the economy, and as emergency Fed steps to calm spooked financial markets healed frayed nerves.

Since then, the Fed has also noticeably stiffened its rhetoric in support of the dollar, which notched record lows against the euro this year as the U.S. central bank slashed rates while the ECB stayed on hold.

Foreign exchange market conditions will be reviewed by finance ministers and central bank chiefs of the Group of Eight rich nations at a meeting in Japan this weekend.

In advance of this gathering, the remarks by Trichet that euro zone borrowing costs may in fact have to rise have buffeted the dollar further. But Fisher dismissed talk that the Fed and ECB were at odds over policy.

“I admire Trichet’s emphasis on price stability. We are not competing against the Europeans,” he said.