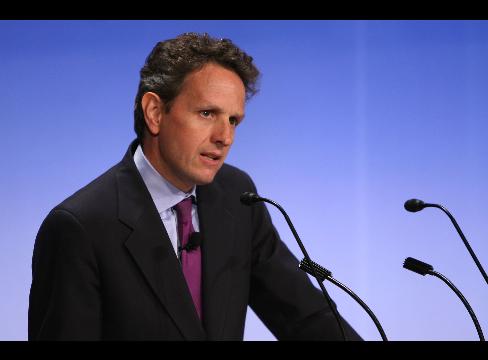 Fresh off of the 2008 Bilderberg Meeting, it looks as if New York Federal Reserve president Timothy Geithner is set to push a new agenda in the world of central banking that was likely decided upon at Bilderberg. Geithner yesterday, wrote an article in the Financial Times calling for a global regulatory banking framework.

In addition, Geithner called for the Federal Reserve to have an instrumental role in this new framework. Geithner cites all of the problems that were actually created by the central bankers in the first place as the rationale for having greater centralized power. It is interesting Geithner decides to write this piece right after the Bilderberg Meeting where some of the most powerful figures in the world of central banking attended.

Not only did Geithner attend, but the attendee list included Ben Bernanke the Federal Reserve Chairman, Henry Paulson the U.S. Treasury Secretary, Jean-Claude Trichet the president of the European Central Bank, Robert Zoellick the president of the World Bank and other high profile bankers.

By establishing a new global regulatory banking framework, this will inch the planet ever closer to a one world currency operating in a cashless society where microchips are used to facilitate transactions. Make no mistake about it, this system will not be good, because it will be controlled by a bunch of criminal psychopaths like the one’s who attended the 2008 Bilderberg Meeting.

In his Financial Times article, Geithner wrote the following:

The institutions that play a central role in money and funding markets – including the main globally active banks and investment banks – need to operate under a unified framework that provides a stronger form of consolidated supervision, with appropriate requirements for capital and liquidity. To complement this, we need to put in place a stronger framework of oversight authority over the critical parts of the payments system – not just the established payments, clearing and settlements systems, but the infrastructure that underpins the decentralised over-the-counter markets.

Because of its primary responsibility for the stability of the overall financial system, the Federal Reserve should play a central role in such a framework, working closely with supervisors in the US and in other countries. At present the Fed has broad responsibility for financial stability not matched by direct authority and the consequences of the actions we have taken in this crisis make it more important that we close that gap.

Finally, we need a stronger capacity to respond to crises. The Fed has put in place a number of innovative new facilities that have helped ease liquidity strains. We plan to leave these in place until conditions in money and credit markets have improved substantially.

What Geithner is proposing is entirely insane but this is the same tactic that the financial elites used to establish the Federal Reserve back in 1913. They created a crisis and said that the crisis happened because they didn’t have enough power to prevent it. The Panic of 1907 which was used to justify the passage of the Federal Reserve Act was actually caused by JP Morgan and assorted elite financial interests. They did this so they could use the crisis as an excuse to centralize their control and power over the banking system. Through the Federal Reserve, banks were finally consolidated under its umbrella through the Great Depression which was deliberately caused by the tight monetary policies implemented by the central bank. Throughout the 1920s money was made plentiful, but following the stock market crash of 1929, the Federal Reserve tightened the money supply which put hundreds of community banks out of business and allowed the central bankers to consolidate control over the nation’s banking system.

Geithner is using the excuse of the current financial crisis that was caused by the Federal Reserve and the world’s assorted central banks in order to again consolidate more power for the banking cartel. It is simply history repeating itself, only this time it is on a much larger scale.

Below is another blurb taken from Geithner’s Financial Times piece:

Since last summer, we have lived through a severe and complex financial crisis. Why was the financial system so fragile? What can be done to make the system more resilient in the future?

The world experienced a financial boom. The boom fed demand for risk. Products were created to meet that demand, including risky, complicated mortgages. Many assets were financed with significant leverage and liquidity risk and many of the world’s largest financial institutions got themselves too exposed to the risk of a global downturn. The amount of long-term illiquid assets financed with short-term liabilities made the system vulnerable to a classic type of run. As concern about risk increased, investors pulled back, triggering a self-reinforcing cycle of forced liquidation of assets, higher margin requirements, increased volatility.

What Geithner doesn’t say in his article is that the current global financial crisis was caused by the Federal Reserve and the world’s various central banks. Alan Greenspan intentionally set interest rates at incredibly low levels after the 9/11 attacks. This encouraged lenders to lend out money using all sorts of creative financing packages. It also encouraged borrowers to borrow money from the lenders because of the cheaper money. These policies lead to the continued devaluation of the U.S. Dollar and the U.S. housing crisis which have been the main drivers behind most of the economic problems we are currently seeing.

Geithner wants us to believe that giving the Federal Reserve and the rest of this private banking system more power is what’s needed to resolve all of the economic problems that were caused by the central bankers themselves. How stupid does Geithner and the rest of the global elite think we are? We have a historical track record of central bankers creating economic problems and bringing in phony solutions to expand their control. We need decentralization and free markets to resolve the economic problems that have been created by these people, not more centralized power.

If all of this wasn’t bad enough, Jim Tucker from the American Free Press speaking on the Alex Jones show today stated that one of his Bilderberg sources revealed to him that the global elite are planning to push forward their cashless society grid agenda with the use of implantable microchips. The implantable microchips would be sold as a way for people to easily move through the militarized control grid that they’ve setup via the bogus terror war. Tucker also mentioned that we would see the media hyping the phony terror war and specifically the phony “white Al-Qaeda terror threat” as a way for them to continue the justification of the enslavement grid. Assuming Tucker’s Bilderberg source is providing accurate information, this agenda that Geithner is pushing in his Financial Times article is right in line with their well documented plans to get rid of cash. The central bankers would need a global regulatory framework for the banking system so they can move closer to a global currency operating in a cashless society.

This is some incredibly scary stuff. Of course there was not one word of the 2008 Bilderberg Meeting in any major U.S. media outlets. The corporate controlled media maintained a blackout on any coverage of this incredibly important yearly meeting of the global elite. It is pathetic when citizen journalists like the ones at InfoWars, PrisonPlanet and RogueGovernment provide the best coverage of what is one of the most important geopolitical meetings of the year. Either way, the commentary from Geithner as well as the information from Tucker’s Bilderberg source seems to indicate that the global elite are getting ready to further centralize the banking system in order to establish their one world cashless society grid. These criminals must be exposed and their system of global corruption and tyranny must be defeated. Let’s tell these bastards that they can take their cashless society grid and their implantable microchips where the sun don’t shine.