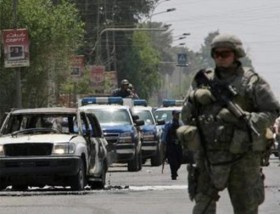 Baghdad: A proposed Iraqi-American security agreement will include permanent American bases in the country, and the right for the United States to strike, from within Iraqi territory, any country it considers a threat to its national security, Gulf News has learned.

Senior Iraqi military sources have told Gulf News that the long-term controversial agreement is likely to include three major items.

Under the agreement, Iraqi security institutions such as Defence, Interior and National Security ministries, as well as armament contracts, will be under American supervision for ten years.

The agreement is also likely to give American forces permanent military bases in the country, as well as the right to move against any country considered to be a threat against world stability or acting against Iraqi or American interests.

The sources confirmed that the American army is in the process of completing the building of the military facilities and runways for the permanent bases.

He added that the American air bases in Kirkuk and Mosul will be kept for no longer than three years. However, he said there were efforts by the Americans to include the Kirkuk base in the list of permanent bases.

The sources also said that a British brigade was expected to remain at the international airport in Basra for ten years as long as the American troops stayed in the permanent bases in Iraq.

Iraqi analysts said that the second item of the controversial agreement which permits American forces on Iraqi territories to launch military attacks against any country it considers a threat is addressed primarily to Iran and Syria.

Iran has raised serious concerns in the past few days over the Iraqi-American security agreement and followed it with issuing religious fatwas and called for demonstrations, mainly by the powerful Shiite leader Moqtada Al Sadr movement, who is close to Iran, against the agreement.