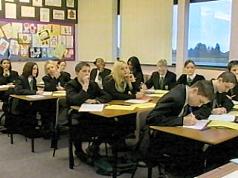 Children will learn by downloading information directly into their brains within 30 years, an education expert has predicted.

He said: “It’s a very short route from wireless technology to actually getting the electrical connections in your brain to absorb that knowledge.”

Mr Parry, a former Rear Admiral, spent three years determining the future strategic context for the military in a senior role at the Ministry of Defence.

He said the Keanu Reeves thriller may not look like science fiction in 30 years’ time.

“Within 30 years, sitting down and learning something will be a thing of the past,” Mr Parry said.

“I think people will be able to directly access, Matrix-style, all the vocabulary you need for a foreign language, leaving you just to clear up the grammar.”

Mr Parry is now preparing the ISC’s 1,300 private schools, which collectively teach half a million children, for a high-tech future.