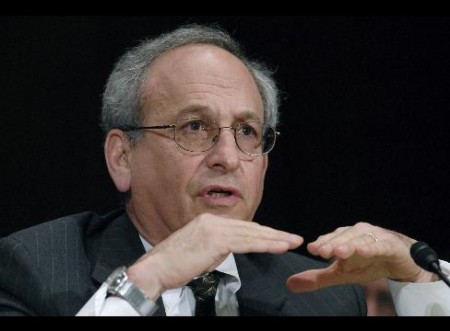 May 30 (Bloomberg) — Federal Reserve Board Vice Chairman Donald Kohn raised the possibility of giving Wall Street securities firms permanent access to loans from the central bank, as long as regulators tighten oversight of the companies.

Kohn also advocated continuing Fed auctions of funds to commercial banks and loans of Treasuries to Wall Street dealers even after markets stabilize. Such channels would stay open “either on a standby basis or operating at a very low level,” he said in a speech in New York yesterday.

The remarks go beyond Fed Chairman Ben S. Bernanke, who has indicated the central bank would shut lending to investment banks when the credit crisis passes. Lawmakers and regulators are debating how to approach the supervision of investment banks in the aftermath of the Fed’s rescue of Bear Stearns Cos. in March.

“If you are a bondholder in one of these Wall Street firms, you know you have a big `Sugar Daddy’ now called the Federal Reserve that’s going to back you up,” said Jeff Pantages, chief investment officer of Alaska Permanent Capital Management in Anchorage, which oversees $1.8 billion in assets.

“But if you are a stockholder this kind of worries you” because investment banks “will be more highly regulated and won’t be able to use leverage as much as” before, he said.

Kohn said he hasn’t decided whether securities firms should continue to gain access to loans from the central bank.

“The more extensive the access, the greater the degree to which market discipline will be loosened and prudential regulation will need to be tightened,” Kohn said in his speech to a conference hosted by the New York Fed. “Unquestionably, regulation needs to respond to what we have learned about the importance of primary dealers and their vulnerabilities to liquidity pressures.”

In addition, central banks are considering arrangements to accept collateral from other countries denominated in other currencies, Kohn said. “A number of issues need to be resolved,” he said, adding that major central banks may agree on accepting a “common pool of very safe collateral.”

Kohn didn’t discuss the outlook for the economy or interest rates in his prepared remarks. Financial markets are still “far from normal,” he said, repeating a phrase other Fed officials have used.

Federal Deposit Insurance Corp. Chairman Sheila Bair called on May 28 for greater oversight of investment banks, including a formula for closing them in case of insolvency, in return for access to Fed loans.

The Fed should return to its normal practices “as soon as that would be consistent with stable, well-functioning markets,” Kohn said yesterday. “Central banks should not allocate credit or be market markers on a permanent basis.”

In response to an audience question, Kohn said a shortage of Treasury securities is “not one of the things I’m worried about.”

The Fed sought in March to prevent a financial-market meltdown by rescuing Bear Stearns from bankruptcy with a $13 billion temporary loan. It also opened up lending to the dealers in the first extension of credit to nonbanks since the Great Depression.

“The Fed is feeling things out right now and is not sure how far it wants to go,” said Robert Brusca, president of Fact & Opinion Economics in New York and former head of the New York Fed’s international financial markets division.

The Fed said yesterday direct loans of cash to commercial banks through the traditional discount window rose to a daily average of $16 billion in the week ended May 28, while loans to primary dealers fell to $12.3 billion.

It’s the first time since the Fed started lending to the dealers in March that commercial banks have borrowed more at the discount window in a week on average than the investment banks have borrowed from the PDCF. The PDCF was scheduled to last at least six months, though the Fed could extend it. That decision is a “difficult and important question,” Kohn said.

“The public authorities need to consider several difficult issues” regarding Fed borrowing by primary dealers, Kohn said. The Fed could limit borrowing to times when the central bank deems financial-system stability to be at risk, or it could grant the firms the “same sort of regular access enjoyed by commercial banks,” he said.

“We need to ensure that supervisory guidance regarding liquidity risk management is consistent with” dealers’ access to Fed loans, he said.

Meanwhile, the Fed is “working closely with the Securities and Exchange Commission to provide appropriate prudential oversight of primary dealers and their affiliates,” Kohn said.

Bernanke said yesterday, repeating May 13 remarks, that “once financial conditions become more normal, the extraordinary provision of liquidity by the Federal Reserve will no longer be needed.”

The Fed’s new programs are “designed to be self- liquidating as markets improve,” Kohn said. They are set up so they are “effective when markets are disrupted,” yet “uneconomic when markets are functioning well.”

“The Federal Reserve’s auction facilities have been an important innovation that we should not lose,” Kohn said. “They have been successful at reducing the stigma that can impede borrowing at the discount window in a crisis environment and might be very useful in dealing with future episodes of illiquidity in money markets.”

Kohn, 65, has more experience at the central bank than all other Fed governors. He served as a top adviser to former Chairman Alan Greenspan before his appointment to the board in 2002. He became vice chairman in 2006.

To contact the reporter on this story: Scott Lanman in Washington at slanman@bloomberg.net; Anthony Massucci in New York at amassucc@bloomberg.net.