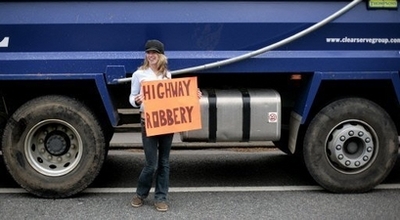 “It is now understood that a global shock on this scale requires global solutions,” Brown wrote in The Guardian newspaper.

Record oil prices of around 135 dollars a barrel have contributed to protests worldwide over the rise in fuel and food costs, with fishermen and truck drivers taking the lead in Europe, blocking ports and road access to oil depots.

“However much we might wish otherwise, there is no easy answer to the global oil problem without a comprehensive international strategy,” Brown said, adding that the problem should be made a “top priority” at the EU summit next month and the gathering of G8 leaders in July.

“The way we confront these issues will define our era,” he said.

Brown’s warning came a day after French President Nicolas Sarkozy urged a Europe-wide cut in consumer taxes on fuel and Portugal’s economy minister Manuel Pinho called on the Slovenian head of the European Union to hold an urgent debate on the crisis.

French consumers pay about 19.6 percent VAT on the price of fuel and Sarkozy renewed his reduction proposal on Wednesday during a visit to Warsaw.

“Should we really apply the same tax rate when the price of a barrel of oil has doubled in one year and tripled in three years? I don’t think this is a crazy question to be asking,” Sarkozy told reporters in the Polish capital.

While fishermen called off strikes in key French ports on Wednesday, lifting a week-long blockade of the country’s largest oil refinery, truckers and farmers stepped up their own protests over soaring fuel prices.

A group of 300 farmers used their cars to block the entry to a Total fuel depot near Toulouse, while around 40 protesting truck drivers slowed traffic to a near-halt on Bordeaux’s main ring road.

And a policeman and a protestor were slightly injured when riot police using tear gas battled farmers blocking an oil depot near Sete on France’s Mediterranean coast.

In Bulgaria, where annual monthly salaries are among the lowest in the EU and inflation rates among the highest, around 150 trucks drove slowly along capital Sofia’s ring road, disrupting traffic.

Bulgarian bus companies were preparing to launch a nationwide one-hour strike on Friday.

In Spain, the main trucking union has called for an indefinite strike beginning June 8.

At a meeting Tuesday of EU agriculture ministers in Slovenia, France and Spain led the call for direct EU economic assistance to the fishing industry.

EU member states can currently give their fishermen a subsidy of up to 30,000 euros (47,167 dollars) over a three-year period without seeking the European Commission’s approval.

But French and Spanish fishermen consider this too low and have demanded additional help from their governments to be able to cope with the sharp increase of diesel prices.

Italian, Greek and Portuguese fishermen have threatened to strike later this week.

The Netherlands and Portugal however expressed scepticism, arguing for a long-term solution for the fishermen, including modernising their fleets and increasing competitiveness.

“Short-term solutions are the most popular in political terms, but they have no lasting effect,” said Portuguese Agriculture Minister Jaime Silva.