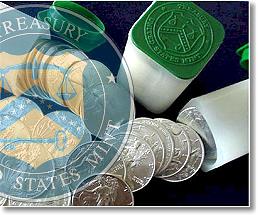 The coins, each containing about an ounce of silver, have become so popular among investors seeking alternatives to stocks and real estate that the U.S. Mint can’t make them fast enough. In March, the mint stopped taking orders for the bullion coins. Late last month, it began limiting how many coins its 13 authorized buyers world-wide are allowed to purchase.

“This came out of nowhere,” says Mark Oliari, owner of Coins ‘N Things Inc. in Bridgewater, Mass., one of the biggest buyers of silver eagles. With customers demanding twice as many as they did last year, Mr. Oliari would like to buy 500,000 a week. But the mint will sell him only around 100,000.

The coins have a face value of $1. But the mint sells them for the going price of silver, plus a small premium, to a handful of wholesalers, brokerage companies, precious-metals firms, coin dealers and banks. The dealers mark the coins up a bit more and sell them to the public. Currently, the coins are fetching about $19 apiece, with some sellers seeking more than $20.

For Coins ‘N Things alone, the shortage is costing hundreds of thousands of dollars in lost sales of silver eagles. The firm sells about $1 billion worth of precious metal every year, including silver, gold and platinum coins. Mr. Oliari, a 50-year-old numismatist who has been in the business since 1973, sniffs: “You can’t print what I want to say about the mint.”

The mint, a bureau of the U.S. Treasury, has offered little explanation beyond a memo last month to its dealers. “The unprecedented demand for American Eagle Silver Bullion Coins necessitates our allocating these coins on a weekly basis until we are able to meet demand,” the mint wrote. A spokesman declined to elaborate.