China’s worst earthquake in more than 30 years struck southwest China on May 12, killing tens of thousands and injuring many more.

The death toll from the powerful 7.9 magnitude quake could soar above 50,000 as hope fades for thousands buried under rubble, state media says.

The official death toll already stands at over 21,500, with 25,000 still buried in areas rescuers have struggled to reach in Sichuan province.

The government says the quake damage could exceed the devastating 1976 tremor in the northeastern city of Tangshan that killed up to 300,000 people. 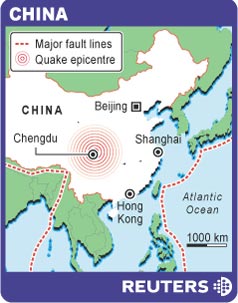 Roads and phone lines have been cut off since the quake, which caused buildings to sway across China and as far away as the Thai capital Bangkok.

The epicentre was in the mountainous county of Wenchuan, which has a population of about 100,000 people.

In the worst-hit areas – the hilly, rural area of Beichuan as well as Wenchuan to the southwest – buckled and blocked roads meant supplies and rescuers have struggled to arrive.

China mobilised 130,000 army and paramilitary troops to the area, some of them hiking in on foot.

Buildings toppled in at least six counties near the epicentre, Xinhua said. At least 1,000 students and teachers were buried under a seven-storey school in the Beichuan city of Mianyang, and parents were desperate and angry after hundreds of teenagers and children were buried in several other schools.

At least one hospital was also reported to have collapsed.

Hundreds of damaged dams raised fears of collapse or flooding that could inundate towns and cities already struggling to recover. And officials warned of mudslides on brittle hillsides as it rains in the region.

Xinhua said there was no immediate impact to the Three Gorges Dam project, hundreds of kilometres from Chengdu. But experts have said the weight of its massive reservoir could increase the risk of tremors.