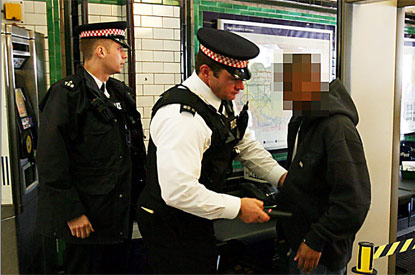 Police are to use hundreds of airport-style and hand-held weapon detectors in the crackdown on knife crime.

Teams of 15 officers will be deployed across the 10 boroughs in London that have recorded the most knife crime.

Assistant Commissioner Tim Godwin, head of territorial policing in the capital, said officers would be deployed in areas blighted by stabbings to stop and search teenagers suspected of carrying weapons.

Police admit the “in your face policing” is expected to raise community tensions in some areas.

But they say they are getting significant support from communities desperate for them to crack down on the problem.

The powers enable officers to stop people and search them without the need to have “reasonable suspicion” that they are engaged in wrong doing.

There has been criticism of the powers because research has found it hits black communities disproportionately.

Stop and search has been strongly criticised in the past but police say there is now more support for the action – provided it it is done with sensitivity.

Mr Godwin said community groups across London were being consulted. He added: “There are victims in all our communities and law-abiding citizens from all walks of life actually want us to stop this problem.

“There will always be some who take issue with it, but we have to justify what we are doing by driving down the number of stabbings we are getting in London.

“Our objective is not about harassing anybody. It’s about making everybody as safe as we possibly can in London.”

One Metropolitan Police Authority member, barrister Peter Herbert, criticised the plan today. He said: “It will undoubtedly lead to more stop and search, and more racist stop and searches where people are stopped on the basis of their appearance or ethnicity.

“The MPA was not consulted and it should have been. It is another example of policy being manufactured on the hoof for political expediency.”

It is understood Boris Johnson’s deputy mayor for policing, Kit Malthouse, was involved in discussions on the plan but other MPA members were not informed.

Search teams of officers are using a total of 550 metal-detecting wands and 244 airport-style detection arches.