WASHINGTON (AFP) — US authorities rushed aid to disaster areas Monday after a series of tornadoes tore across the United States, killing at least 22 people, shattering homes and businesses, and leaving tens of thousands without power.

US President George W. Bush called it a “sad day” for devastated communities in the states of Missouri, Oklahoma and Georgia and promised emergency federal aid.

A total of 14 people were reported dead in Missouri, two in the southeastern state of Georgia, and six in Oklahoma, which earlier had reported seven fatalities. There were also scores of injured.

“We are still conducting some search and rescue today,” Susie Stonner, a spokeswoman for Missouri’s department of emergency management, told AFP, adding that some of the injured were “in hospital in critical condition.”

Numerous tornadoes touched down in Oklahoma late Saturday as the storms ripped across the state at 35-45 miles per hour (55-70 kmh), killing seven in the area near the town of Picher, the Oklahoma department of emergency management said. Some 150 people were injured there.

Fierce winds ripped roofs off houses, and other homes were thrashed to kindling as the storms downed power lines, utility poles and trees.

“In some cases, only a home’s concrete slab remains,” Oklahoma authorities said in a statement. 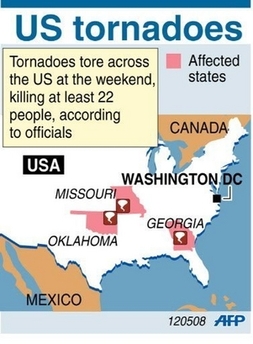 The American Red Cross has opened shelters for those affected by the storms in Oklahoma and Missouri.

Oklahoma Governor Brad Henry declared a state of emergency in the disaster area and planned to visit it later Sunday, while National Guard troops were called to shut off access to Picher.

“We will get through this pulling together and working together as Oklahomans, making sure our neighbors have what they need,” Henry was quoted by the Oklahoman newspaper as saying.

The state said that about 6,300 homes and businesses were without electricity, including 3,000 near Tulsa.

Bush called it “a sad day for those who lost their lives in Oklahoma and Missouri and Georgia because of the tornadoes.”

Bush later called Henry as well as governors Sonny Perdue of Georgia and Matt Blunt of Missouri to offer whatever federal assistance they needed, according to White House officials.

The storms barreled eastward, killing two people and damaging hundreds of homes in the southeastern state of Georgia in the early morning hours of Sunday, the state’s emergency management agency said.

Perdue declared a state of emergency for six counties hardest hit by severe thunderstorms, hail and tornadoes in central Georgia.

The small town of Kite, with some 1,000 residents, was devastated.

“From what I understand it has been completely destroyed,” said agency spokeswoman Lisa Janak.

“Many roads are still blocked and impassable,” she said. “They’re having problems with trees in the road, so these are very preliminary estimates, but the town of Kite sustained significant, significant damage.”

Some 43,0000 people across the state were without power early Monday, down from 253,000 at the peak of the outages, Georgia Power told the Atlanta Journal Constitution.

Meanwhile a severe storm and tornado swept through another southeastern state, North Carolina, on Sunday afternoon, dumping tennis ball-sized hail, but no deaths or serious injuries were reported, the Charlotte Observer newspaper said.

In February, a string of storms brought rare winter tornadoes to the Southern states of Tennessee, Arkansas, Kentucky and Alabama, killing 55 and injuring hundreds.