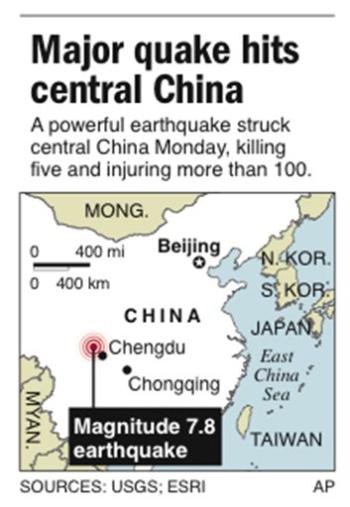 BEIJING (AP) – A massive earthquake struck central China on Monday and state media reported that as many as 5,000 people were killed in a single county while nearly 900 students were trapped under the rubble of their school.

The official Xinhua News Agency said 80 percent of the buildings had collapsed in Beichuan county in Sichuan province after the 7.8-magnitude quake.

Xinhua reported that 3,000 to 5,000 people had died in Beichuan, which has a population of 160,000, raising fears the overall death toll could increase sharply. Another 10,000 people were believed to be hurt.

The earthquake sent thousands of people rushing out of buildings and into the streets hundreds of miles away in Beijing and Shanghai. The temblor was felt as far away as Pakistan, Vietnam and Thailand.

Rescuers had recovered at least 50 bodies from the debris of the school building in Juyuan township, about 60 miles from the epicenter. Xinhua did not say if any students had been pulled out alive.

An unknown number of students also were reported buried after buildings collapsed at five other schools in Deyang city in Sichuan, Xinhua reported.

It said its reporters saw buried teenagers struggling to break loose from underneath the rubble of the three-story building in Juyuan “while others were crying out for help.”

Two girls were quoted by Xinhua as saying they escaped because they had “run faster than others.”

The earthquake comes less than three months before the start of the Beijing Summer Olympics, when China hopes to use to showcase its rise in the world.

Shanghai’s main index inched up Monday, but the advance was capped by worries over inflation and potential damage from the earthquake. Analysts said that shares of companies located in the Sichuan region may fall in coming sessions due to the quake.

It struck in the middle of the afternoon when classes and office towers were full, about 60 miles northwest of Chengdu. There were several smaller aftershocks, the U.S. Geological Survey said on its Web site.

Calls into the city did not go through as panicked residents quickly overloaded the telephone system. The quake affected telephone and power networks, and even state media appeared to have few details of the disaster.

“In Chengdu, mobile telecommunication convertors have experienced jams and thousands of servers were out of service,” said Sha Yuejia, deputy chief executive officer of China Mobile.

Although it was difficult to telephone Chengdu, an Israeli student, Ronen Medzini, sent a text message to The Associated Press saying there were power and water outages there.

“Traffic jams, no running water, power outs, everyone sitting in the streets, patients evacuated from hospitals sitting outside and waiting,” he said.

Xinhua said an underground water pipe ruptured near the city’s southern railway station, flooding a main thoroughfare. Reporters saw buildings with cracks in their walls but no collapses, Xinhua said.

The earthquake also rattled buildings in Beijing, some 930 miles to the north, less than three months before the Chinese capital was expected to be full of hundreds of thousands of foreign visitors for the Summer Olympics.

Many Beijing office towers were evacuated, including the building housing the media offices for the organizers of the Olympics, which start in August. None of the Olympic venues was damaged.

“I’ve lived in Taipei and California and I’ve been through quakes before. This is the most I’ve ever felt,” said James McGregor, a business consultant who was inside the LG Towers in Beijing’s business district. “The floor was moving underneath me.”

In Fuyang, 660 miles to the east, chandeliers in the lobby of the Buckingham Palace Hotel swayed. “We’ve never felt anything like this our whole lives,” said a hotel employee surnamed Zhu.

Patients at the Fuyang People’s No. 1 Hospital were evacuated. An hour after the quake, a half-dozen patients in blue-striped pajamas stood outside the hospital. One was laying on a hospital bed in the parking lot.

Skyscrapers in Shanghai swayed and most office occupants went rushing into the streets.

In the Taiwanese capital of Taipei, 100 miles off the southeastern Chinese coast, buildings swayed when the quake hit. There were no immediate reports of injuries or damage.

A magnitude 7.8 earthquake is considered a major event, capable of causing widespread damage and injuries in populated areas.

The last serious earthquake in China was in 2003, when a 6.8-magnitude quake killed 268 people in Bachu county in the west of Xinjiang.