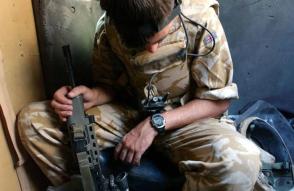 A highly sensitive internal report into the state of the British Army has revealed that many soldiers are living in poverty. Some are so poor that they are unable to eat and are forced to rely on emergency food voucher schemes set up by the Ministry of Defence (MoD).

Some of Britain’s most senior military figures reacted angrily yesterday to the revelations in the report, criticising the Government’s treatment of its fighting forces.

The disturbing findings outlined in the briefing team report written for Sir Richard Dannatt, the Chief of the General Staff, include an admission that many junior officers are being forced to leave the Army because they simply cannot afford to stay on.

Pressure from an undermanned army is “having a serious impact on retention in infantry battalions”, with nearly half of all soldiers unable to take all their annual leave as they try to cover the gaps.

The analysis, described by General Dannatt as “a comprehensive and accurate portrayal of the views and concerns of the Army at large”, states: “More and more single-income soldiers in the UK are now close to the UK government definition of poverty.” It reveals that “a number of soldiers were not eating properly because they had run out of money by the end of the month”. Commanders are attempting to tackle the problem through “Hungry Soldier” schemes, under which destitute soldiers are given loans to enable them to eat.

The scheme symbolises a change from the tradition of soldiers getting three square meals a day for free. Now hard-up soldiers have to fill out a form which entitles them to a voucher. The cost is deducted from their future wages, adding to the problems of soldiers on low pay.

The controversial Pay as You Dine (PAYD) regime, which requires soldiers not on active duty to pay for their meals, has seen commanding officers inundated with complaints from soldiers unhappy at the quality of food that they get and the amount of paperwork involved.

Senior officers warn in the report that “there is a duty of care issue” and add that the “core meal” provided to soldiers on duty “is often not the healthy option”. The confusion of which soldiers even qualify for free meals while on duty is revealed in the admission that “in some areas the soldier has to pay and then claim back and in others the duty meal is included in the contract”.

General Dannatt has vowed to take action. He said, “I am determined that PAYD must be made to work to both the financial and physical well-being of those who are fed.”

Despite numerous assurances by the Government to look after wounded soldiers, the report warns of deep resentment over a cap on the amount of compensation that wounded soldiers receive. It outlines the “deep frustration” at the inadequate amount being spent on accommodation.

The level of accidental deaths also comes under fire. “Ten potentially avoidable accident fatalities in operational theatres in one year [2007] is not acceptable,” said General Dannatt.

He added: “I am concerned at the comments from the chain of command, some elements of which clearly believe that they will lose influence over their soldiers and that this will impact on unit cohesion.” He also described improvements to equipment as being of “little use” because there is not enough for soldiers to be trained in using it until they are deployed.

Army chiefs and politicians claimed the document proved the Government was failing to meet its responsibilities towards Britain’s servicemen and women, laid out in the Military Covenant. They say it is a damning indictment of an army that is losing its edge and close to breaking point as it struggles to keep pace with fighting a war on two fronts.

Patrick Mercer, a Tory MP and former army colonel, said the report reinforced widespread anxieties over conditions for the troops and that many top-ranking officers are breaking ranks to express their fears. “I’ve been talking to some very senior officers recently, all of whom privately have said to me that the Army is running on empty; the money has run out,” Mr Mercer said. “The manpower situation is in crisis, and the so-called Military Covenant is abused at every turn. The thing that really worries them is the manpower situation and the fact that the MoD seems to be in denial about it.”

Colonel Bob Stewart, a former commander of British forces in Bosnia, said the Army was struggling with overstretch and undermanning. He added: “It’s inevitable that the British Army is actually woefully imbalanced … badly equipped, particularly for training, and quite honestly I’m afraid to say it is losing its edge as a top-rate army in the world because it cannot maintain it.”

Major General Julian Thompson, who led 3 Commando Brigade in the Falklands war, said: “There are certain ministers that may be very honest and care and want things done, but the problem is whether they are being given support from the very top, and I sense that they are not. We all know where the money comes from, the Treasury and the Prime Minister.”

Major General Patrick Cordingley, who led the Desert Rats into Iraq during the first Gulf War, said the report raised serious questions about the Army’s ability to meet its commitments. He said: “I would be very concerned about the strain on the armed forces remaining at this level of deployment in both Afghanistan and Iraq. It cannot be sustained for longer than perhaps another two years.”

An MoD spokesman yesterday tried to gloss over the report, which was based on months of interviews with thousands of soldiers and their families between July 2007 and January 2008. He attempted to play down the degree of poverty among soldiers, many of whom earn £16,000 a year, and added: “Briefing team reports contain the unedited views of individual soldiers, some of which reflect widespread opinion, while others are isolated views. The reports are published widely and the feedback given by lower ranks in the Army helps CGS to stay firmly in touch with life across the Army.”

But there is a growing dissent being expressed on military websites. Pay remains a major issue for both soldiers and officers. One describes the pay as “appalling, disgusting and pathetic”.

Douglas Young of the British Armed Forces Federation said: “People are leaving the armed forces for financial reasons. There’s no question about that.”

Liberal Democrat defence spokesman Nick Harvey said, “Junior ranks in the armed forces have terrible salaries when you compare them to people starting out in the police service or fire service. How on earth are you supposed to recruit and retain people unless you offer a decent salary?”

“Soldiers will be called upon to make personal sacrifices – including the ultimate sacrifice – in the service of the nation … In return, British soldiers must always be able to expect fair treatment, to be valued and respected as individuals.

“The chain of command, from the Government downwards, is responsible for articulating and sustaining the morality and justice of the cause in question … Only on this basis of absolute confidence in the justice and morality of the cause can British soldiers be expected to be prepared to give their lives…”

What the big guns say…

Colonel Bob Stewart, former UN commander, Bosnia: “The British Army is imbalanced and is losing its edge as a top-rate army in the world”

Maj-Gen Patrick Cordingley, Commander, first Gulf War: “It saddens me how little the junior ranks are paid when you consider what they are asked to do”

Lord Bramall, former chief of defence staff: “Each year they strive to put a quart set of requirements into a pint pot of funding”

Colonel Clive Fairweather: Former SAS deputy commander: “I really do think the Army is heading for the rocks and I don’t say this lightly”