“And also looking to the United Nations about whether we can invoke the responsibility to protect.” 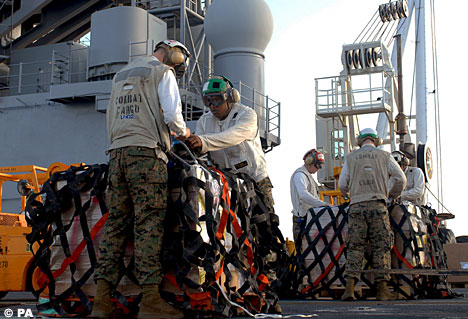 Aid is trickling into the country, but Oxfam says more co-operation is needed from the government 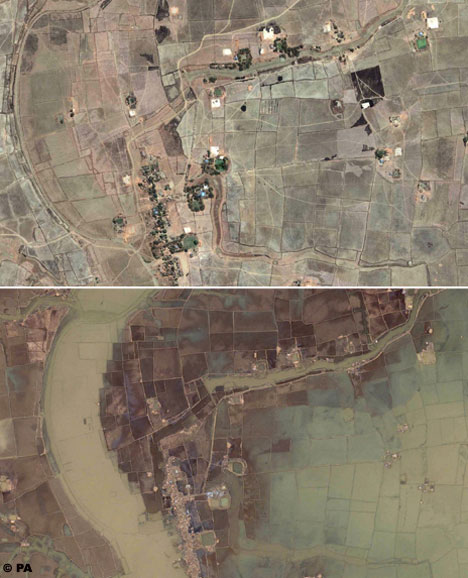 Before and after: these aerial photos show the damage caused by the storm

“I think that his authority would actually make a difference if he made that visit. There’s no more important humanitarian issue for him to deal with.”

His proposal would involve delivering aid from the air or from the sea, he said.

“In the end what matters is getting aid through to people and feeding them and stopping them from dying.”

“We have seen some improvement in terms of the number of flights that have been allowed in recent days,” he said.

“But it’s wholly inadequate given the scale of the crisis.”

He added: “We haven’t ruled anything out given the dynamic nature of the situation and the fact that we are genuinely fearful in terms of the capacity of waterborne diseases of diarrhoea and other developments to cause significant loss of life which could be avoided if we see more rapid progress.”

Aid continued to trickle into Burma today with the first US flights being allowed entry – some nine days after the devastating cyclone stuck, killing as many as 100,000. 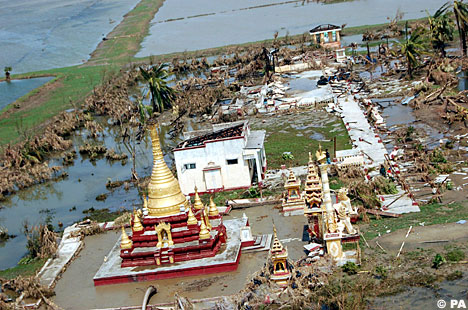 The death toll could rise up to 1.5million following the cyclone, Oxfam has warned.

But members of the Disasters Emergency Committee said that the “clock was ticking” in the race to save further lives in the face of disease, starvation and further torrential rain to come.

Storm warnings have been issued for the region despite large swathes of the country still lying submerged under putrid floodwater from the initial cyclone.

It is feared that further heavy deluges will hamper the progression of the embryonic aid effort, which is only just beginning to reach the worst hit areas.

This morning, following prolonged negotiations, an aid flight from the US was allowed to land in Burma and was met by members of the isolationist country’s ruling junta.

Medecins Sans Frontieres also reported getting its first cargo plane into the capital of Rangoon today. 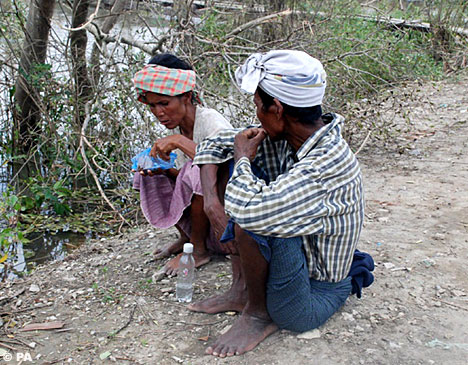 Desperate: thousands of people are homeless in the aftermath of the cyclone

More flights are expected in the coming days, the charity said.

An estimated 100,000 people have already died in the badly hit Irrawaddy Delta region.

Oxfam has warned the final figure could be as high as 1.5 million unless aid is given free access to the worst hit areas.

Attention is now focused on preventing sickness spreading amongst the millions of displaced survivors.

Speaking from neighbouring Thailand today, Chris Webster, from World Vision’s emergency response team, said: “With every day that passes, more and more lives are at risk of a potentially massive public health problem. 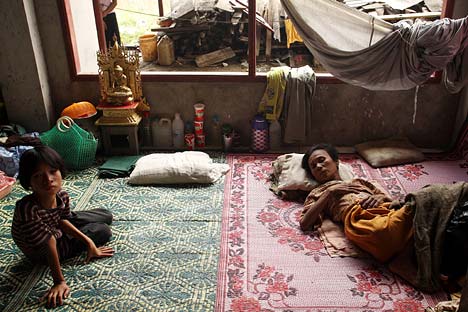 Stricken: A Burmese family suffering illness in the cyclone’s aftermath”

We do not believe that a disaster on this scale can be handled by any government alone. It requires international assistance.”

A World Vision assistance team in the village of Myaung Myu has reported “harrowing” conditions.

Diarrhoea and respiratory infections have spread among many of the 30,000 displaced people in makeshift camps.

There is now concern that malaria, diptheria and cholera outbreaks could occur.

Alongside providing medical care, organisations are now looking to address the psychological impact on children caught up in the disaster.

Child friendly spaces are being set up to help those orphaned by the disaster.

“We are setting up areas for children to play, to try and create a sense of normality. If you can provide that environment early, child stand a chance of recovering fully,” Mr Webster said.

Despite their efforts, aid agencies continues to be hampered by the position of Burma’s ruling junta.

Speaking from within the county, World Vision’s Tim Costello said: “With every day I spend here, the sense of urgency increases.

“There are thousands of people receiving aid every day, yet there are tens of thousands more still to be helped.

“The sight of so many people without shelter or basic necessities is distressing. The work is urgent, the need great.”

He added: “There are hopeful signs of a breakthrough in discussions that will allow aid to start flowing into the country.

“But the clock is ticking in the race to save lives and the fear is that we are on the cusp of a second wave of disaster if relief efforts are not dramatically scaled up.”

In a stinging attack he told BBC1’s The Politics Show: “A natural disaster is turning into a humanitarian catastrophe of genuinely epic proportions in significant part because of the malign neglect of the regime.

The Disasters Emergency Committee (DEC) an umbrella group for the organisations dealing with the crisis said that donations of around £5 million had now been made to an appeal fund for the crisis.