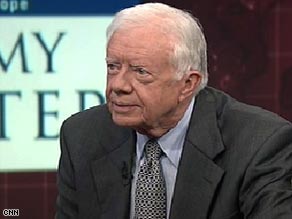 “I don’t think it. I know it,” Carter told CNN’s Wolf Blitzer.

“Our country for the first time in my life time has abandoned the basic principle of human rights,” Carter said. “We’ve said that the Geneva Conventions do not apply to those people in Abu Ghraib prison and Guantanamo, and we’ve said we can torture prisoners and deprive them of an accusation of a crime to which they are accused.”

Carter’s comments come on the heels of an October 4 article in The New York Times disclosing the existence of secret Justice Department memorandums supporting the use of “harsh interrogation techniques.” These include “head-slapping, simulated drowning and frigid temperatures,” according to the Times.

The White House last week confirmed the existence of the documents but would not make them public.

Responding to the newspaper report Friday, Bush defended the techniques used, saying, “This government does not torture people.”

Asked about Bush’s comments, Carter said, “That’s not an accurate statement if you use the international norms of torture as has always been honored — certainly in the last 60 years since the Universal Declaration of Human Rights was promulgated.

After reading a transcript of Carter’s remarks, a senior White House official said, “Our position is clear. We don’t torture.”

The official said, “It’s just sad to hear a former president speak like that.”

Carter also criticized some of the 2008 Republican presidential candidates, calling former New York Mayor Rudy Giuliani “foolish” for his contention the United States should be open to use force on Iran.

“I hope that he doesn’t become president and try to impose his conviction that we need to go to war with Iran,” Carter said.

The Giuliani campaign declined to comment on Carter’s criticism.

The former president didn’t spare the rest of the GOP field either.

“They all seem to be outdoing each other in who wants to go to war first with Iran, who wants to keep Guantanamo open longer and expand its capacity — things of that kind,” Carter said.

“They’re competing with each other to appeal to the ultra-right-wing, war-mongering element in our country, which I think is the minority of our total population.”

Carter declined to say which Republican candidate he feared the most.

“If I condemn one of them, it might escalate him to the top position in the Republican ranks,” he said.

Democratic Sens. Hillary Clinton of New York and Barack Obama of Illinois also drew Carter’s criticism for refusing recently to pledge to withdraw all troops from Iraq by the end of their first terms if they win the presidency in 2008.

“I disagree with their basic premise that we’ll still be there; I think the American people want out,” Carter said. “If there is an unforeseen development where Iraqi people request American presence over a period of time I think that would possibly be acceptable, but that’s not my personal preference.”