“What it means is that U.S. drug companies contract with cheap, low-end Chinese chemical factories to manufacture their drugs at something like two cents a pill (which they can mark up to $20 a pill or more…), and then they import these Chinese-made pills and don’t even test them before selling them to U.S. consumers!”

(NaturalNews) Remember a couple of years ago how the FDA warned Americans not to buy prescription drugs from Canada because they might be “contaminated by terrorists?” I’m not making that up: That was the official announcement of an FDA spokesperson, and it was part of their fear strategy for enforcing a monopoly on U.S. consumers so that Big Pharma could continue engaging in rampant price fixing.

The implication in that warning is that drugs purchased in the United States are therefore safer, correct? What the FDA didn’t tell anyone, however, is that most pharmaceuticals purchased in the United States are manufactured outside the U.S.; many from China or Puerto Rico. So they’re not even made in the U.S. anyway, and drug companies are simply importing them from other countries just like a consumer might do if she drove across the border and bought her medications in Canada or Mexico.

But hold on: The FDA actually used to run full-page magazine ads warning consumers about the dangers of drugs being contaminated if they were bought from Mexico, Canada or — God forbid — the Internet! Those drugs were dangerous, the FDA warned us, because they were not subjected to rigorous quality control requirements. The implication in that warning, of course, is that brand-name pharmaceuticals sold in the U.S. at U.S. pharmacies must therefore NOT be contaminated.
Enter the blood-thinning drug Heparin. This blood-thinning drug, made by Baxter International, was recently discovered by consumers to have been manufactured in China. Worse yet, the quality controls in China were so low that this FDA approved, brand-name prescription drug was apparently deliberately contaminated with an adulterated chemical that has now resulted in the death of dozens of consumers in the United States. Sound familiar? It’s precisely the scenario dreamed up by the FDA to warn consumers away from pharmaceuticals purchased in Canada, Mexico or elsewhere. But guess what? It turns out that brand-name, FDA-approved prescription drugs sold at monopoly prices right here in the United States are adulterated too!
Three astonishing facts about brand-name pharmaceuticals

So far, then, there are three astonishing facts that have come out of this recent news about Heparin:

Fact #1: Most U.S. prescription drugs aren’t even made in the U.S.

Fact #2: Many U.S. prescription drugs are made in China, a country widely known to have the lowest quality control standards in the world.

That third fact should send a chill up your spine. What it means is that U.S. drug companies contract with cheap, low-end Chinese chemical factories to manufacture their drugs at something like two cents a pill (which they can mark up to $20 a pill or more…), and then they import these Chinese-made pills and don’t even test them before selling them to U.S. consumers!

If it wasn’t for the fact that so many Americans have now died from this, the whole thing would be quite hilarious. Why? Because the FDA and Big Pharma are always running around touting how “safe” their products are while screaming about how dangerous herbs and supplements are. And yet nutritional supplement companies test their ingredients for contaminants with far greater frequency than drug companies. That Heparin contamination flap would never have happened to an honest nutritional supplement company because they’re always testing their raw materials — especially if they buy materials from China, which is known all over the world as the Capitol of Contamination!

Big Pharma, it seems, just skips that step. Whatever the Chinese throw into their pill bottles, U.S. drug companies just buy it and pass it on to patients and consumers without bothering to test the pills before selling them. Wow. Talk about trading safety for profits…

So much for the “safety” of Big Pharma’s drugs sold in the United States, huh? This isn’t something you hear in Big Pharma’s TV ads, is it? “Buy Vytorex. Made in China! Never tested for contaminants! Take at your own risk!”

Did you know that the FDA has not inspected 93% of the factories that manufacture pharmaceuticals outside the U.S.? You can read more details on that in my article entitled Heparin Blood Thinner Drug Linked to Sudden Deaths; Cheap Ingredients Imported from Chinese Chemical Factory at http://www.naturalnews.com/022654.html

As it turns out, many of the pharmaceuticals manufactured for U.S. drug companies are contaminated with bizarre things like metal parts from the gears of processing machines, flecks of paint from factory walls, and who knows what else. The safety standards are so incredibly low for pharmaceuticals that cheap, low-cost manufacturers in China and elsewhere can apparently put almost anything in the drugs, and nobody ever checks the quality anyway. These drugs are rushed right from the cheap Chinese factories to pharmacy shelves in the United States where gullible consumers — comforted by the FDA’s proclamations of quality and safety — swallow these pills and die.
How China could poison half the U.S. population

Now, remember the fictional terrorist plot I mentioned above that the FDA used to try to scare Americans away from buying pharmaceuticals from Canada? Well what if we someday have a military conflict with China, and the Communist leaders of that country decide to attack the American people through their pharmaceuticals? It would be a very simple matter for Chinese authorities to intentionally adulterate the drugs with mildly toxic ingredients or even biological agents (infectious diseases) that would sicken American consumers and start to spread through the population.

Since many drugs manufactured in China are not tested for contaminants, nobody in America would even have a clue! People would just pop their antidepressants, erection drugs, cholesterol drugs, heart medications and other pills, only to find that a few days later they were either sick or dead. With so many “American” drugs manufactured in China, our nation is vulnerable to a massive contamination attack.

Think about that the next time you pop a pill from Big Pharma. Do you really know where that pill came from? Do you really know whether it was ever tested? Chances are, it was made in China or Puerto Rico, under highly unsanitary factory conditions, and was never even tested before you bought it.
Drugs aren’t safe just because they’re not contaminated

You know what’s really hilarious in all this news about contaminated drugs like Heparin? These drugs aren’t even safe when they’re NOT contaminated! Even if you remove all the adulterated chemicals that are killing people, and even if you get rid of all the factory machine parts being found in pills, and the paint and other physical contaminants from the factory floor, then you’re still left with a pill made with synthetic, non-natural chemicals that can kill you anyway!

Blood thinners, for example, are literally made with rat poison. That’s the proper recipe! Yes, rat poison. It’s a chemical that’s been used for over a hundred years to kill rats by causing them to bleed to death internally. Reduce the dosage to a non-fatal amount, pop it into a capsule, then get the FDA to approve the deadly chemical as “safe” and you know have a medication suitable for humans! People who take blood thinners are literally poisoning themselves with rat poison. That is no exaggeration.

In summary, be sure to remember these ten facts about the pharmaceutical industry and its quality control failures:

Fact #1: Most pharmaceuticals sold in America are NOT made in America. Drug companies routinely try to hide this fact.

Fact #2: Many brand-name pharmaceuticals are contaminated with adulterated chemicals, metal shavings from factory machine parts, or other undesirables.

Fact #3: Many brand-name drugs are NOT tested for contaminants before being sold to consumers in the U.S., Canada and other countries.

Fact #4: The FDA does not inspect most factories that make drugs outside the U.S. (93% are never inspected)

Fact #5: There is no law requiring drug companies to state their drugs are “Made in China.”

Fact #6: Even when pharmaceuticals are not contaminated with deadly chemicals, they’re still often made with other deadly chemicals that are intentionally part of the recipe!

Fact #7: The FDA’s response to the Heparin contamination discovery reveals the agency to be a pack of bumbling idiots who have no grasp whatsoever on quality control. They only discovered the drug contamination AFTER people started dropping dead.

Fact #8: If you take pharmaceuticals, you are playing a form of Big Pharma’s Russian Roulette with your life. There is no guarantee that any pill you take is safe or that it has ever been tested for contamination.

Fact #9: The pharmaceutical industry has deceived consumers by implying that drugs bought in the U.S. are somehow safer than drugs purchased in Canada, Mexico or elsewhere.

Remember, too: Nobody in the drug industry — not the FDA, not Big Pharma, nobody! — has ever tested the long-term safety of using multiple prescription drugs in combination. These chemical cocktails of two, five or a dozen prescription drugs are extremely toxic to the liver, kidneys and other organs, and there is zero scientific evidence showing them to be safe for long-term combined consumption by consumers.

And finally, consider this: Big Pharma is now pushing the Supreme Court to grant the industry blanket immunity for all pharmaceuticals, a move that would immediately lift any and all testing requirements and quality control measures since the drug companies would no longer be liable for what’s in their pills! See this story for more details: http://www.naturalnews.com/023042.html 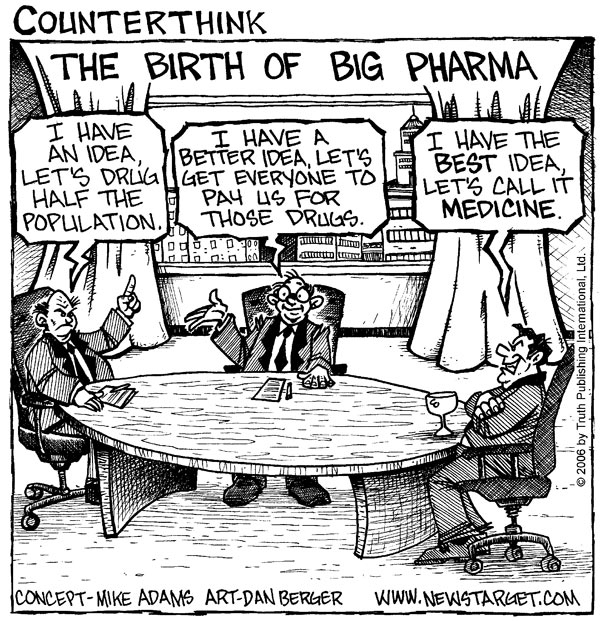 About the author: Mike Adams is a consumer health advocate with a strong interest in personal health, the environment and the power of nature to help us all heal He is a prolific writer and has published thousands of articles, interviews, reports and consumer guides, reaching millions of readers with information that is saving lives and improving personal health around the world. Adams is an independent journalist with strong ethics who does not get paid to write articles about any product or company. In 2007, Adams launched EcoLEDs, a manufacturer of mercury-free, energy-efficient LED lighting products that save electricity and help prevent global warming. He also launched an online retailer of environmentally-friendly products (BetterLifeGoods.com) and uses a portion of its profits to help fund non-profit endeavors. He’s also the founder and CEO of a well known email mail merge software developer whose software, ‘Email Marketing Director,’ currently runs the NaturalNews email subscriptions. Adams volunteers his time to serve as the executive director of the Consumer Wellness Center, a 501(c)3 non-profit organization, and enjoys outdoor activities, nature photography, Pilates and adult gymnastics. He’s also author of numerous health books published by Truth Publishing and is the creator of several consumer-oriented grassroots campaigns, including the Spam. Don’t Buy It! campaign, and the free downloadable Honest Food Guide. He also created the free reference sites HerbReference.com and HealingFoodReference.com. Adams believes in free speech, free access to nutritional supplements and the ending of corporate control over medicines, genes and seeds. Known as the ‘Health Ranger,’ Adams’ personal health statistics and mission statements are located at www.HealthRanger.org