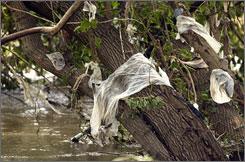 Those improvement efforts face a huge challenge mitigating problems in what the EPA estimates to be 1.2 million miles of sewers snaking underground across the USA.

Waste gurgles from manholes and gushes down streams and rivers somewhere in the USA almost every day, the EPA estimates.

• In March, 700,000 to 1.3 million gallons of human feces and other waste spilled from a damaged pipe into Grand Lagoon at Panama City Beach, Fla., said Al Shortt, the city’s utilities director.

• In January, about 20 million gallons of sewage flowed into Pennsylvania’s Schuylkill River after a 42-inch pipe ruptured near Reading, according to the state’s Department of Environmental Protection.

“When people flush their toilets, they think the sewage is going to the treatment plant, and that’s where they deserve to have it go,” said Nancy Stoner, a project director at the Natural Resources Defense Council, which says the government isn’t doing enough to police sewage overflows.

Gannett News Service analyzed enforcement and compliance records compiled by the EPA and state regulators from January 2003 to February 2008.

The analysis found that at least one-third of the nation’s large, publicly owned sewage treatment systems were the subject of formal enforcement actions by the EPA or state regulators for sewage spills or other violations. Those enforcement actions included fines as well as orders to fix problems or expand treatment capacity. Fines totaling $35 million were assessed against 494 of the nation’s 4,200 municipal facilities that treat at least 1 million gallons of sewage daily, the analysis shows.

In addition, some states have levied penalties that aren’t included in the EPA data. Cities with the largest fines included San Diego ($6.2 million), New York ($3 million) and Los Angeles ($1.6 million).

An EPA 2004 report to Congress estimated that 850 billion gallons of storm water mixed with raw sewage pour into U.S. waters every year from older, combined sewer systems that were designed to overflow in wet weather. These combined systems, built by cities in the 19th and early 20th centuries, are now considered antiquated and a threat to public health and the environment, according to the EPA and environmental groups.

An additional 3 billion to 10 billion gallons of raw sewage spill accidentally every year from systems designed to carry only sewage, according to the 2004 report. Causes of these spills include improper connections, clogs from debris, construction accidents and cracks in aging pipes.

The EPA estimates that as many as 5,500 people get sick every year from direct exposure to sewer overflows near beaches.

Regulators and citizens’ lawsuits have pressured local governments to take on costly, complex modernization projects that may take more than a generation to complete.

Pittsburgh’s Allegheny County Sanitary Authority, for example, has agreed to a project that could cost $3 billion over the next 20 years.

Ratepayers are being asked to foot much of the bill. A review of local authorities’ responses to costly consent decrees requiring sewer system improvements found rates have already increased in several cities, including Louisville, Nashville, Atlanta and San Diego. The review showed pending increases for cities including Pittsburgh, Washington and Los Angeles.

The EPA’s 2002 Clean Water and Drinking Water Infrastructure Gap Analysis reported the nation’s municipal sewer authorities’ capital needs to meet clean water requirements from 2000 to 2019 ranged from $331 billion to $450 billion. Based on that data, the National Association of Clean Water Agencies now puts that range at $350 billion to $500 billion for the next 20 years, association spokeswoman Susan Bruninga said.

This year, the federal government has budgeted $687 million for such improvements.

One modernization project alone, in Indianapolis, could cost $1.2 billion. Residents hope the repairs will end years of smelly and unsightly problems along Fall Creek.

“I have walked this area on numerous occasions and could see condoms decorating bushes where the water level had been high (and), feminine hygiene products along the shores, toilet paper hanging in bushes,” said Richard Van Frank, a local environmental activist and retired biochemist.

Legislation that would require sewer authorities to notify the public of overflows and spills is pending in Congress.

One environmental group, American Rivers, uses humor and a “Spill of the Week” Web blog to encourage support for a nationwide public notification law.

“We try to be a little snarky about this,” said Josh Klein, a campaign coordinator for American Rivers. “After all, we’re talking about poop. But it is a serious issue.”

By Larry Wheeler and Grant Smith, Gannett News Service
May 08, 2008