This is the moment a tourist died in the street after being restrained by police.

Frank Ogboru, 43, was sprayed with CS gas and pinned down after a minor row. CCTV footage captured him losing consciousness after screaming: “I can’t breathe. I can’t breathe.”

The Nigerian businessman, who was in London on holiday, stopped breathing and was declared dead in hospital.

Witnesses said officers had their “knees and feet” on him as he “wailed like a dog”. 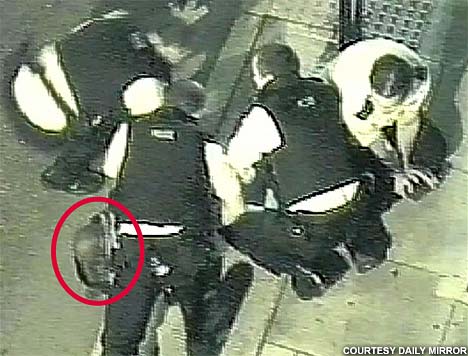 But the CPS decided there was “insufficient evidence” for any of the officers to be charged in connection with Mr Ogboru’s death in Woolwich in September 2006.

Speaking from her home in Lagos, Mr Ogboru’s widow, Christy, said: “I am crushed. I put my faith in the British system to give me justice but it has failed me.

“Frank was not a criminal. He did not deserve to die in the street like an animal.”

Officers were called to Calderwood Street where Mr Ogboru had rowed with the girlfriend of the man he was staying with.

CCTV footage shows him calmly talking to two officers but when they order him not to return to the flat a struggle ensues.

Two more officers arrive to help restrain him. Footage appears to show one officer’s knee over his neck as his head dangles over the kerb.

When the police saw Mr Ogboru had stopped breathing they tried to revive him but it was too late.

The Independent Police Complaints Commission investigated and the four officers were questioned under caution.

A pathologist gave “asphyxia during restraint” as the cause of death but the CPS decided “a jury would find that the restraint was not unlawful” as there was not sufficient evidence that the officers had breached their duty of care.

Mrs Ogboru, 40, has been left penniless. She travelled to London but was forced to return home when the Met and the commission ended her financial support.

She is being represented by solicitor Imran Khan, who acted for the family of Zahid Mubarek, murdered in a young offender institution.

She said: “I want someone to take responsibility for my husband’s death. I am determined to find a way to return to the UK as I must have justice.”

The four officers remain on restricted duties. The IPCC will send a file to the Met for its recommendation on whether disciplinary action should be taken. The IPCC will then take the final decision.

1 thought on “Pictured: The moment a London tourist dies after screaming ‘I can’t breathe’ to police who restrained him”