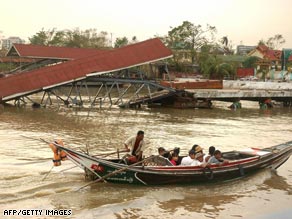 YANGON, Myanmar (CNN) — Bodies are being thrown into rivers by Myanmar cyclone survivors in desperate need of help.

The government-run radio station said Tuesday that 22,464 are confirmed dead and 41,000 are missing, and the United Nations says that up to 1 million could be homeless.

Rivers said that bodies were being dropped into rivers and that survivors had only small amounts of eggs and rice. The area’s rice mills are destroyed, leaving Bogalay with a five-day supply. Water pumps were also ruined, and fuel was scarce.

He reported destroyed homes along 30-kilometer stretches. In one area, only four homes remained from a total of 369. People were taking shelter under canvas sheets, and the weather remained awful.

Rivers had seen the army and Red Cross in the area.

One woman described to the Democratic Voice of Burma — a broadcast media group run by opposition expatriates — a wall of water jumping from the Gulf of Mottama into the delta areas.

CNN obtained the video in which the survivor said she walked a trail dotted by dead bodies to get to safety, passing a group of about 1,000 homeless people who slept on the street.

“Yes, there is tide coming along. Trees fall over people,” the survivor said. “There are many dead bodies lying under trees. Yes, all people I saw are crying too much and searching for bodies of loved ones. There is bad smell from dead bodies on the way we came from.”

The woman said she lived in the village of Dadaye near the gulf in southern Myanmar, which was in the path of the storm. She said that as she fled, she passed a village where only six people survived.

“We found about 40 dead bodies on this way,” the woman said. “Everywhere … in the bushes like this, and in the streams like this. Everywhere.”

The aftermath has pushed Myanmar’s normally secretive ruling military junta to ask for aid and release details of the devastation. However, the U.N. said its aid workers were still waiting for visas to enter the country. It, the Red Cross and other aid organizations have been gathering supplies to ship to the country.

The U.N. World Food Programme said it has managed to begin distributing food in areas of Yangon and is preparing to send emergency supplies from across Asia.

Preliminary WFP assessment reports confirmed tremendous storm damage to homes and shelters, and they said flooding and road damage means some areas are still cut off.

Spokeswoman Bettina Luescher said, “Many areas are accessible only by boat, but many of the boats have been destroyed.”

President Bush called on the military junta Tuesday to allow the U.S. to help with disaster assistance.

Bush, who made the comments while signing legislation awarding the Congressional Gold Medal to Myanmar democracy advocate Aung San Suu Kyi, said the U.S. was ready to “come and help.”

An iReporter documents the destruction »

“The United States has made an initial aid contribution, but we want to do a lot more,” Bush said.

U.S. military officials said it would take four days for the nearest Navy ships to get to the affected area.

“Instead of waiting for figures on casualties and damage, it will be practical to send humanitarian aid to victims as soon as possible,” Swe said.

Based on a satellite map made available by the U.N., the storm’s damage was concentrated over about a 30,000-square-kilometer area along the Andaman Sea and Gulf of Martaban coastlines, home to nearly a quarter of Myanmar’s 57 million people.

Kyi Minn of the international aid group World Vision said the situation was bleak, with clean drinking water, food, medicine and shelter all at a premium.

Shari Villarosa, the top U.S. diplomat in Myanmar, said urgent help was needed. “The situation is very bad and not getting better,” she said.

A U.N. humanitarian official said a five-person disaster assistance coordination team had arrived in Bangkok, but they do not know when they can enter Myanmar.

Watch as some aid arrives in Myanmar »

Michael Kocher of the International Rescue Committee said Myanmar has to start issuing visas immediately so aid groups can build on the work that is just being started.

Nargis pummeled Yangon for more than 10 hours from Friday night into Saturday, with 20 inches of rain and winds above 240 km/hr.

Although Myanmar’s ruling military junta has been accused by U.S. first lady Laura Bush of not warning the public about the approaching cyclone, witnesses say state media did report the storm — it just came too late.

“We did get a warning, but it seems the military warned at a late stage,” an Australian witness in Yangon said, adding that there was no time for people to evacuate or buy emergency supplies.

She also said that perhaps “a lot of Burmese didn’t take it as seriously as they could have.”

MRTV disputed media accounts of insufficient warnings ahead of the storm.

“Timely weather reports were announced and aired” on TV and radio two to three days in advance to keep people “safe and secure,” an MRTV anchor reported.

See photos of the destruction »

The International Federation of Red Cross and Red Crescent Societies said it had released $190,000 to help with the aftermath of the storm, the U.S. has pledged $3.25 million, the European Commission $3.1 million, Canada $2 million, China $1 million in aid including relief materials worth $500,000 and Thailand $100,000.

The country’s state radio said Saturday’s vote on a military-backed draft constitution would be delayed until May 24 in 40 of 45 townships in the Yangon area and seven in the Irrawaddy delta, AP reported.

The constitutional referendum is referred to in the state-run media as the fourth step of a “seven-step road map to democracy.”