John Bolton, America’s ex-ambassador to the United Nations, has called for US air strikes on Iranian camps where insurgents are trained for war in Iraq. 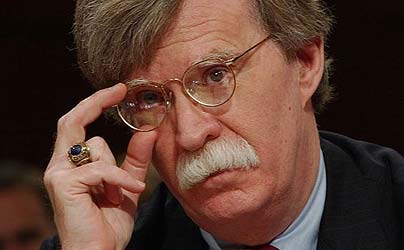 Mr Bolton said that striking Iran would represent a major step towards victory in Iraq. While he acknowledged that the risk of a hostile Iranian response harming American’s overseas interests existed, he said the damage inflicted by Tehran would be “far higher” if Washington took no action.

“This is a case where the use of military force against a training camp to show the Iranians we’re not going to tolerate this is really the most prudent thing to do,” he said. “Then the ball would be in Iran’s court to draw the appropriate lesson to stop harming our troops.”

Mr Bolton, an influential former member of President George W Bush’s inner circle, dismissed as “dead wrong” reported British intelligence conclusions that the US military had overstated the support that Iran was providing to Iraqi fighters.

A US military spokesman revealed last week that the elite Quds Force of Iran’s Revolutionary Guards had drafted in personnel from Lebanon’s Hizbollah to train fighters from Iraq’s Shia militias.

Colonel Donald Bacon, a spokesman for the coalition in Baghdad, said captured fighters had told interrogators that thousands of Iraqi fighters were undergoing training in the Islamic Republic.

The main camp is located near the town of Jalil Azad, near Tehran, according to coalition officials.

The capture of Qais Khazali, a major figure in the Shia insurgency alongside Ali Mussa Daqduq, a senior Lebanese Hizbollah guerilla, last year yielded a treasure trove of information on Hizbollah’s activities in Iraq.

“Ali Mussa Daqduq confirmed Lebanese Hizbollah were providing training to Iraqi Special Group members in Iran and that his role was to assess the quality of training and make recommendations on how the training could be improved,” said Col Bacon. “In this role, he travelled to Iraq on four occasions and was captured on his fourth trip.”

Five Britons kidnapped in Iraq are believed to have been put under the control of Quds Force agents after failed attempts to barter the men for Khazali and Daqduq’s freedom.

The importance of the Quds Force to stability in Iraq was demonstrated last week when a five-member Iraqi delegation was sent to Tehran to meet with its commander, General Ghassem Soleimani. The delegation was despatched by the Iraqi government to plead for an end to Iranian meddling in its enfeebled neighbour.