(As of mid-April, 68 wrongful-death or injury lawsuits have been dismissed or judgments entered in favor of Taser, according to the company. The company has not lost any product-liability lawsuits.

“It was an interesting case and an uphill battle,” said Manley. “Taser is quite a force to be reckoned with and does everything to protect their golden egg, which is the Model X26.”) 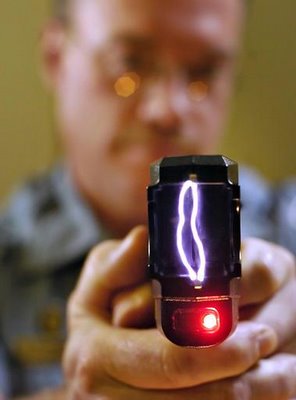 The deaths of Dennis Hyde and Richard Holcomb, who were on drugs and in an agitated state when police shot them with Tasers, should be ruled accidental, visiting Judge Ted Schneiderman wrote in his ruling. Any reference to homicide or “electrical pulse stimulation” should be deleted from death certificates and autopsy reports, he said.

The order to change the ruling in the death of the third man, Mark McCullaugh, could be more far-reaching.

McCullaugh, who had a history of psychiatric illness, died in Summit County Jail on Aug. 20, 2006, during a struggle with deputies who used Tasers and pepper spray. Five sheriff’s deputies were indicted in his death.

Schneiderman ordered Kohler to rule McCullaugh’s death undetermined and delete any references to homicide and the death possibly being caused by asphyxia, beatings or other factors.

That pleased Sheriff Drew Alexander. The deputies, three charged with reckless homicide and two with felonious assault, are on unpaid leave.

“This supports my initial beliefs that my employees acted appropriately,” Alexander said in a statement.

Schneiderman’s order regarding McCullaugh goes far beyond the focus of the case, said John Manley, of the prosecutor’s office, who represented Kohler.

“The purpose of the hearing represented a singular and very narrow issue on whether or not the successful deployment of the Taser Model X26 could contribute in any way to the cause of death,” Manley said. He may appeal.

Kohler’s rulings were controversial because few coroners have said the Taser was a factor in deaths. Other coroners typically cite other contributing factors, such as drug use, heart disease and cardiac arrhythmia due to illegal drug use.

Hyde, 30, died Jan. 5, 2005, during a struggle with Akron police. Three officers used Tasers. Hyde, of Hartville, had broken into a house through a window. He was on methamphetamine and suffered blood loss from cuts from the window.

Holcomb, 18, of Akron, died May 28, 2005, after he attacked a Springfield Township officer in a field. She shot him four times with her Taser. Kohler ruled Holcomb was also in a psychosis from using methamphetamine and Ecstasy.

Taser International maintains the weapon is not a factor if police use it and the suspect later dies. Numerous experts testified on its behalf at the four-day hearing in April.

“Taser International believed from the beginning that these determinations of cause of death must be supported by facts, medical research and scientific evidence,” spokesman Steve Tuttle said in a prepared statement Friday.

As of mid-April, 68 wrongful-death or injury lawsuits have been dismissed or judgments entered in favor of Taser, according to the company. The company has not lost any product-liability lawsuits.

“It was an interesting case and an uphill battle,” said Manley. “Taser is quite a force to be reckoned with and does everything to protect their golden egg, which is the Model X26.”