Ron Paul’s loyal supporters helped him set campaign fundraising records and capture more delegates during his presidential run than some of his high-profile Republican rivals. They even managed to briefly shut down Nevada’s GOP convention earlier this month over a rules change controversy.

Now they’ve taken his latest book to the top of the Amazon.com bestseller list.

“The Revolution: A Manifesto”, released earlier this month, is currently No. 1 on the Web site’s list of top sellers, besting even Oprah’s latest Book Club selection. 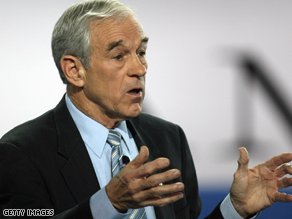 “Despite a media blackout, this septuagenarian physician-turned-congressman sparked a movement that has attracted a legion of young, dedicated, enthusiastic supporters . . . a phenomenon that has amazed veteran political observers and made more than one political rival envious,” boasts the book’s product description, adding: “Candidates across America are already running as ‘Ron Paul Republicans.’”