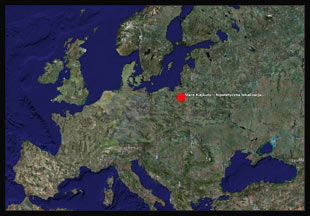 Once a Soviet-era compound once used by German intelligence in World War II, Stare Kiejkuty is best known as having been the only Russian intelligence training school to operate outside the Soviet Union. Its prominence in the Soviet era suggests that it may have been the facility first identified – but never named – when the Washington Post’s Dana Priest revealed the existence of the CIA’s secret prison network in November 2005.

The groups say that they’re not the only ones being stonewalled. Congress, they say, is getting the short end of the stick as well.

“Documents released to plaintiffs by the CIA demonstrate that many within the government itself have been unable to obtain accurate information from the CIA,” the groups said. “These documents, which include letters from Members of Congress to the CIA, demonstrate a pattern of withholding information from Congress. In a pointed bipartisan letter on Oct. 16, 2003, then-Chair and Ranking Member of the House Select Committee on Intelligence requested that CIA Director George Tenet provide senior level briefings on the treatment of, and information obtained by, three men known to be held in secret CIA detention, admonishing the CIA by stating that the committee was ‘frustrated with the quality of the information’ provided in past briefings.”

Additional elements of the release, issued jointly by the three human rights groups, follows. The documents in the lawsuit can be viewed here.

The CIA’s admission that it possesses at least 7000 documents relating to rendition, secret detention and torture generated renewed calls by the human rights groups for transparency and accountability from the government.

“The Freedom of Information Act is one of the major checks on government criminality in this country,” said CCR Executive Director Vincent Warren. “The CIA has acknowledged that it has well over 7000 documents that relate to the torture and disappearance of men. These include some of our clients, like Majid Khan, who were known to be in the program. The public needs to know what crimes were committed in our name and how they were justified. This has been the most secretive, least transparent administration in history, and it is well past time for accountability.”

AIUSA, CCR, and NYU IHRC have filed FOIA requests with several U.S. government agencies, including the CIA. These FOIA requests sought information about individuals who are-or have been-held by the U.S. government or detained with U.S. involvement, and about whom there is no public record. The requests also sought information about the government’s legal justifications for its secret detention and extraordinary rendition program. Comprehensive information about the identities and locations of prisoners in CIA custody-as well as the conditions of their detention and the specific interrogation methods used against them- has never been publicly revealed. This lack of transparency continues to prevent scrutiny by the public or the courts and leaves detainees vulnerable to abuse and torture.

Although the CIA did release a paltry number of documents in response to the FOIA request, most were already in the public domain, such as newspaper articles and a single copy of the Fourth Geneva Convention which governs the treatment of civilians in times of war. The limited relevant documents that were released were documents pertaining to briefings demanded by the House and Senate Intelligence Committees regarding various aspects of the overseas detention and interrogation program.
….
The CIA appears to have avoided answering detailed requests for specific information, responding instead with form letters and references to briefings. These practices led to a forceful letter from Senator Carl Levin, Current Chairman of the Senate Committee on Armed Services, (then the Ranking Member) who was attempting to investigate CIA involvement in detainee deaths. In a letter dated Oct. 24, 2005, Senator Levin noted that “[t]he lack of CIA cooperation with the investigations to date has left significant omissions in the record.” The CIA’s failure to cooperate with members of Congress demonstrates the need for public scrutiny of the secret detention and extraordinary rendition program under FOIA.

“The CIA has employed illegal techniques such as torture, enforced disappearances, and extraordinary rendition,” said Meg Satterthwaite, Director of the NYU IHRC. “It cannot use FOIA exemptions as a shield to hide its violations of U.S. and international law.”

In its legal filings, the CIA acknowledged that this program “will continue.” Some prisoners have been transferred to prisons in other countries for proxy detention where they face the risk of torture and where they continue to be held secretly, without charge or trial. Human rights reports indicate that the fate and whereabouts of at least 30 people believed to have been held in secret U.S. custody remain unknown.

In September 2006, President Bush publicly acknowledged the existence of CIA-operated secret prisons. At the same time, 14 detainees from these facilities were transferred to Guantбnamo and several more have arrived since. The administration has admitted to using so-called “alternative interrogation procedures” on those held in the CIA program, including waterboarding. The international community and the United States, in other contexts, have unequivocally deemed these techniques torture.