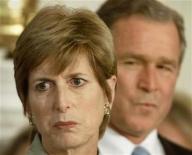 Christine Todd Whitman led the agency at the time of the attacks and was sued by people who lived and worked in lower Manhattan who accused her of statements that “falsely represented … that the air in and around lower Manhattan was safe to breathe.”

The U.S. Court of Appeals for the Second Circuit found that Whitman was faced with conflicting information about dangers posed by the dust and that she had passed on assurances that came from the White House.

While the judges understood the concern that the agency’s performance was “flawed,” they said that “legal remedies are not always available for every instance of arguably deficient governmental performance.”

The court also noted that Congress has set aside a process to compensate victims of the attacks.

“A bare allegation that the head of a government agency, guided by a relevant White House office, knew that her statements were false and ‘knowingly’ issued false press releases is not plausible in the absence of some supporting facts,” the decision said.

Rescue workers and others who spent time near the disaster site have reported a variety of respiratory ailments that they believe came from breathing the ash and dust caused by the collapse of the Twin Towers.