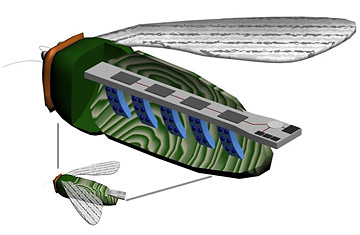 Scientist Amit Lal and his team insert mechanical components into baby bugs during “the caterpillar and the pupae stages,” which would then allow the adult bugs to be deployed to do the Pentagon’s bidding. “The HI-MEMS program is aimed at developing tightly coupled machine-insect interfaces by placing micro-mechanical systems inside the insects during the early stages of metamorphosis,” DARPA says. “Since a majority of the tissue development in insects occurs in the later stages of metamorphosis, the renewed tissue growth around the MEMS will tend to heal, and form a reliable and stable tissue-machine interface.” Such bugs “could carry one or more sensors, such as a microphone or a gas sensor, to relay back information gathered from the target destination.”

DARPA declined TIME’s request to interview Dr. Lal about his program and the progress he is making in producing the bugs. The agency added that there is no timetable for turning backyard pests into battlefield assets. But in a written statement, spokeswoman Jan Walker said that “living, adult-stage insects have emerged with the embedded systems intact.” Presumably, enemy arsenals will soon be well-stocked with Raid.