Routine journeys carried out by millions of British motorists can be monitored by authorities in the United States and other enforcement agencies across the world under anti-terrorism rules introduced discreetly by Jacqui Smith.

The discovery that images of cars captured on road-side cameras, and “personal data” derived from them, including number plates, can be sent overseas, has angered MPs and civil liberties groups concerned by the increasing use of “Big Brother” surveillance tactics. 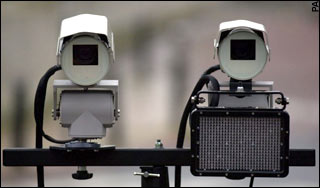 Images captured by road-side cameras will be made available to foreign authorities
Images of private cars, as well as registration numbers, could be sent outside to countries such as the USA

Yesterday, politicians and civil liberties groups accused the Home Secretary of keeping the plans to export pictures secret from Parliament when she announced last year that British anti-terrorism police could access “real time” images from cameras used in the running of London’s congestion charge.

A statement by Miss Smith to Parliament on July 17, 2007, detailing the exemptions for police from the 1998 Data Protection Act, did not mention other changes that would permit material to be sent outside the European Economic Area (EEA) to the authorities in the US and elsewhere.

Her permission to do so was hidden away in an earlier “special certificate” signed by the Home Secretary on July 4.

The certificate specifically sets out the level of data that can be sent to enforcement authorities outside the European Economic Area (the EU plus Iceland, Liechtenstein and Norway) by anti-terrorist officers from the Metropolitan Police. It says:

“The certificate relates to the processing of the images taken by the camera, personal data derived from the images, including vehicle registration mark, date, time and camera location.”
advertisement

A spokesman for Richard Thomas, the information commissioner, confirmed that the certificate had been worded so that the images of private cars, as well as registration numbers, could be sent outside to countries such as the USA.

Officers from the Metropolitan Police have been given the right to view in “real time” any CCTV images from cameras that are meant to be enforcing the congestion charge.

Sources said that officers would access the cameras on behalf of overseas authorities if they were informed about a terrorism threat in the UK or elsewhere. They would then share the images, which can be held for five years before being destroyed, if necessary.

Last night, Nick Clegg, the Liberal Democrat leader, said: “This confirms that this Government is happy to hand over potentially huge amounts of information on British citizens under the catch-all pretext of ‘national security’.”

Civil liberties campaigners said they were appalled that images of innocent people’s journeys could end up in the hands of the British police, let alone foreign investigators.

They feared that it was a move towards the US-style system of “data mining” – in which powerful computers sifted millions of pieces of information as they tried to build patterns of behaviour and match them to material about suspects.

Gus Hosein, who runs Privacy International, said he was making a complaint to the information commissioner having obtained a copy of the certificate.

However, the Home Office defended the powers in the certificate, which was signed specifically for the purposes of counter terrorism and national security.

A spokesman declined to say how many times images had been sent from London to other countries.

However, he added: “We would like to reassure the public that robust controls have been put in place to control and safeguard access to, and use of, the information.”