First-quarter net income declined 77 percent to $1.21 billion from $5.26 billion a year earlier, the Charlotte, North Carolina-based bank said today in a statement. The results fell short of analysts’ estimates and sent the bank’s stock down 2.5 percent in New York trading. 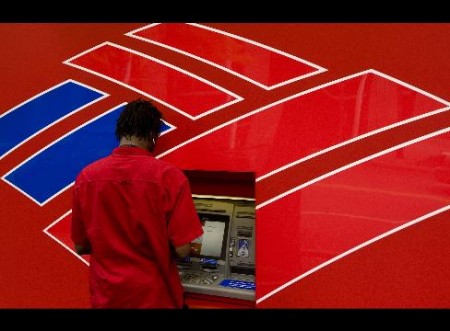 Chief Executive Officer Kenneth Lewis scaled back a January forecast of 20 percent earnings growth this year after reporting the two worst quarters since he took over in 2001. Lewis said he now expects “sequential profit improvement” for the rest of 2008. The bank’s consumer unit, which contributed more than 60 percent of operating income in 2007, faces a nationwide jump in unpaid debt and the highest unemployment rate since 2005.

“The first quarter was much worse than our expectations three months ago,” Lewis said on a conference call. “It’s too early to strike up the band and say that happy days are here again.”

Revenue fell 6 percent to $17.3 billion, while earnings per share shrank to 23 cents from $1.16. Profit decreased 59 percent in the consumer and small business unit, and dropped 92 percent at the corporate and investment bank. Results included $1.31 billion in trading losses and $2.72 billion in costs for uncollectible loans.

Home equity, homebuilder and small-business loans were “particularly” affected by the slowing economy, the bank said.

Lewis affirmed the bank’s focus on U.S. consumers, calling Bank of America’s franchise “the best in the world.” Asked in an interview if the company needs a greater overseas presence to cushion the weakness of the U.S. economy, Lewis said, “The three most global franchises I can think of are UBS, Merrill Lynch and Citigroup.”

Merrill Lynch & Co. and Citigroup Inc., both based in New York, and Zurich-based UBS AG have taken writedowns of about $105 billion since the start of 2007, mostly because of the collapse of the U.S. subprime mortgage market, according to Bloomberg data.

The net interest margin, the difference between interest paid on deposits and received from loans, widened to 2.73 percent from 2.61 percent on Dec. 31.

Earnings growth should enable the bank to maintain its quarterly dividend of 64 cents, a policy that will be revised if the U.S. economy enters a prolonged recession, Lewis said.

“The real guts of the bank appear to be working well and as they manage their way through the credit crisis, they’re going to come out of this in very good shape,” Georges Yard, chief investment strategist at Yared Investment Research in Wayzata, Minnesota, said in an interview.

Bank of America will move deeper into the mortgage business when it acquires Calabasas, California-based Countrywide Financial Corp., the biggest U.S. home lender. The transaction is on schedule to be completed early in the third quarter, Lewis said.

The stock-swap transaction, originally valued at about $4 billion, gives Bank of America a role in one out of every four home loans in the nation. Countrywide, with losses of $1.6 billion over the past two quarters, is scheduled to report quarterly results on April 29.

Earnings included a $776 million pretax gain linked to the sale of shares in Visa Inc., the world’s biggest credit-card network, and $170 million of restructuring costs. San Francisco- based Visa set a record for U.S. initial public offerings last month by raising more than $19 billion, and the stock has since gained more than 60 percent. Bank of America ranked as Visa’s second-largest bank owner after JPMorgan.

The world’s biggest banks and brokerages have disclosed $290 billion of writedowns and credit losses since June because of collapsing prices in U.S. mortgage markets. They’ve raised more than $160 billion to replenish capital, with Bank of America tapping public investors for at least $13 billion after writedowns and credit losses that totaled at least $8.2 billion before today, according to data compiled by Bloomberg.

Bank of America said it can’t collect payments on 4.9 percent of its $75.9 billion credit card portfolio as of March 31, up from 4.5 percent at the end of the previous quarter. The bank is the nation’s biggest issuer of credit cards.

As much as 2.5 percent of the bank’s $118 billion home- equity portfolio may be uncollectible this year, mainly because of lower home prices in California and Florida, Chief Financial Officer Joe Price said. Assuming 2 percent of the bank’s home- equity loans are charged off this year, the cost may be $2.3 billion, Fitch Ratings analyst John Mackerey said in a March 14 report. If the bad loans reach 5 percent, the damage could total $5.9 billion, he said.

About 44 percent of Bank of America’s home-equity loans are in California, Nevada, Arizona and Florida, four states where housing prices are sliding faster than the national average.

Countrywide, with $34 billion in home-equity loans as of Dec. 31, also concentrated on those regions. All four ranked among the top 10 states with the most foreclosure filings last month, according to Irvine, California-based RealtyTrac Inc., a seller of default data. U.S. median home prices as of February were 15 percent below the peak of $230,200 in July 2006, according to the Chicago-based National Association of Realtors.

Bank of America’s largest stockholders at the end of 2007 are Barclays Global Investors, with 4.2 percent, State Street Corp., with 3.5 percent, and Vanguard Group Inc., with 3 percent, according to Bloomberg data. The market capitalization of $167 billion is about 8 percent greater than JPMorgan and about 27 percent more than Citigroup.

Investors have speculated since at least 2006 that Bank of America might make a large acquisition overseas. Lewis said in September 2006 in Singapore that his company was more focused on “organic growth” that would sustain revenue. About 90 percent of revenue last year came from the U.S. and Canada, according to Bloomberg data.

To contact the reporter on this story: David Mildenberg in Charlotte, North Carolina, at 6587 or dmildenberg@bloomberg.net.