Even since astronaut Dave Bowman disconnected the HAL 9000’s holographic memory in 2001: A Space Odyssey techies have been wondering when we could buy real holographic storage. Now we know: May, 2008.

Promising super-high density and excellent media flaw resistance, holographic storage has been an ever-receeding technology for years. You can buy nifty 3D skull and crossbones holograms – technically a form of storage – but no one had figured out how to turn a lab project into a product. Until now.

Update: I added a video of the device and media and VP Liz Murphy talks about the company and the product. About 110 seconds. The clear yellow plastic cover on the device is for display purposes only. End update.

How does it work?
Holograms use 2 coherent laser beams – a reference beam and an illumination beam – to create an interference pattern that is recorded on photo sensitive media. Shine a laser on the recorded interference pattern and the original image is reconstructed in glorious 3D. As the laser moves around – or you do – you see the image from different perspectives.

Holographic storage has a couple of neat properties.

Another factor: photographic media has the longest proven lifespan – over a century – of any modern media. Since there’s no physical contact you can read the media millions of times with no degradation.

Really hard problems
The first laser holograms were made over 45 years ago. But a storage device needs to be fast, dense and manufacturable. InPhase had to literally invent almost every piece of the system. 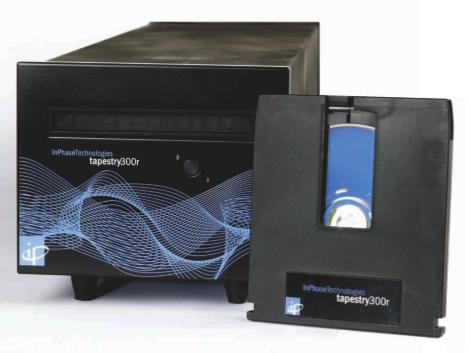 Target market
Which gets us to InPhase’s target market: archiving. That’s why they were showing at NAB.

They’ve spec’d the optical media they use – a 5.25″ clear disk in a cartridge – at 50 years. For film and video companies whose data is literally irreplaceable a stable, compact and random access medium is a no-brainer.

Retail pricing
It is that value that justifies a price – $18,000 – that will keep most of us from buying ourselves an early Xmas gift. The quantity 1 media price of $180 for 300 GB looks expensive to us, but quite reasonable compared with the cost of 35mm film stock and long-term storage.

15 years ago a 3x CD reader cost a few hundred dollars. Perhaps in 15 years holographic burners will be $50 and the media less than a $1.

The Storage Bits take
Kudos to InPhase for a magnificent achievement. This is comparable in many respects to the IBM’s original RAMAC disk back in 1957. They all deserve to get rich.

Learn more about the technology at the InPhase Technologies web site.

Robin Harris has been selling and marketing data storage for over 20 years in companies large and small. See his full profile and disclosure of his industry affiliations.