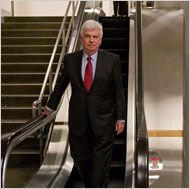 “This is our biggest legislative effort since the Tax Reform Act of 1986,” said Jerry M. Howard, chief executive of the National Association of Home Builders. Hundreds of the association’s members flooded the district offices of representatives and senators while they were home for the spring recess last month.

Supporters of the bill, including Senator Max Baucus, Democrat of Montana and the chairman of the Senate Finance Committee, say it represents sound tax policy carefully focused to help stimulate the lagging economy. But the White House opposes the Senate bill, and Democratic leaders in the House not only have promised to provide more relief for individual homeowners, but have also dropped the corporate tax provisions from their version.

Downtrodden automakers — Ford and General Motors — were especially dogged in securing a tax break that would let them collect alternative minimum tax credits, also known as the A.M.T., that would otherwise be out of reach because they did not pay enough taxes in recent years to claim a rebate.

If the provision becomes law, it could mean checks up to $40 million for the car manufacturers, as long as the companies had made investments in plant or equipment in that amount.

A Ford spokesman, Mike Moran, said he was aware that Ford would benefit from the tax credit in the bill passed by the Senate. But Mr. Moran said that the credit applied to a range of industries, not just automakers.

A spokesman for General Motors, Greg Martin, said today that the auto companies would only be able to use the tax credits to re-invest in their American operations, not their plants overseas. The credits “will surely have a beneficial impact, which is part of the overall effort to stimulate the economy,” Mr. Martin said.

Domestic airlines and manufacturers other than automakers would be eligible to claim the A.M.T. break as well. One lobbyist said that the companies that had sought the tax breaks in meetings with lawmakers included Ford, General Motors, American Airlines, Northwest Airlines and Goodyear Tire and Rubber.

Companies could claim only one of the new tax breaks, which in all, are expected to cost $6 billion through 2018. The jockeying among industry groups, including Realtors, home builders and bankers, is certain to intensify in coming weeks as lawmakers move to reconcile the Senate bill with a more ambitious package of housing legislation now under way in the House.

Lawmakers on the tax-writing House Ways and Means Committee have omitted the corporate tax cuts from their version of the bill in favor of tax breaks for first-time home buyers and developers of low-income rental housing, and more aid for owners facing foreclosure.

Congressional Democrats are also hearing from consumer advocates and other groups who say that the Senate bill does little to help Americans in danger of losing their homes to foreclosure.

“The Senate legislation gave corporations and Wall Street billions in tax breaks,” Terence M. O’Sullivan, the president of the Laborers International Union of North America, said at a news conference on Tuesday to denounce the bill.

Even Senator Christopher J. Dodd, Democrat of Connecticut and the main author of the Senate bill, said the measure did not live up to its name and that he wanted changes. But other lawmakers, and the lobbyists who seek to influence them, also recognize a golden opportunity when they sense that the political winds virtually guarantee a bill’s passage, and the housing crisis is just such a time.

In a sign of how such legislation allows lawmakers to advance many other goals, the Senate bill also includes tax provisions to encourage alternative energy production at a cost of roughly $6 billion over 10 years.

That provision was sponsored by Senator Maria Cantwell, Democrat of Washington, and Senator John Ensign, Republican of Nevada. A similar measure was dropped from a major energy bill last year and again from the economic stimulus bill in February.

But without quick action to extend expiring tax incentives, Ms. Cantwell said, many companies would simply drop projects. The housing bill was the easiest and fastest way to get things moving.

Other industries facing financial difficulties, like retailers, may realize that the tax provisions in the bill offer help for them, too.

Over the next few weeks, industry groups that fought to secure tax provisions in the Senate bill are expected to argue that providing help for important industries offers the best chance of helping to reverse the economic downturn.

To press their case on Capitol Hill, 15 of the biggest residential construction companies, including KB Homes and Toll Brothers, formed a coalition and hired a lobbying firm, the C2 Group, apart from the larger National Association of Home Builders.

Tom Crawford, a founder of the C2 Group, met with staff members of the Senate Finance Committee, several of whose members had already begun expressing concern about the effect of the slowing economy on home builders and other businesses.

The home builders were hardly the only industry that lawmakers heard from as the Senate housing legislation took shape and it became clear that the bill would provide more in the way of tax breaks aimed at stimulating the economy than direct assistance for distressed homeowners.

The cause of the automobile manufacturers was taken up by Senator George Voinovich, Republican of Ohio, and Senator Debbie Stabenow, Democrat of Michigan, who pushed to allow them access to up to $40 million each in alternative minimum tax credits.

Automakers and other companies that have lost money in recent years have accumulated billions of dollars in such credits, which are based on cumulative payments of the corporate alternative minimum tax. Companies, however, can claim a refund of such credits only in years when they pay regular corporate income taxes in amounts that exceed what they would owe under the alternative tax method.

The provision benefiting home builders and other struggling businesses would allow operating losses to be carried back over four years rather than the two years in current law. It is a strategy that Congress has used as a way of stimulating the economy in previous recessions, most recently in 2002 with the support of the Bush administration.

But the White House opposed the idea when members of Congress proposed it as part of the economic stimulus package earlier this year. And some House Democrats suggest that home builders and their lobbyists will face an uphill battle in trying to keep the provision when the Senate bill is reconciled with a rival tax package that was approved last week by the House Ways and Means Committee.

These Democrats said that the Ways and Means chairman, Representative Charles B. Rangel, Democrat of New York, and other leaders, including Nancy Pelosi, the House speaker, would oppose the provision as benefiting builders at a time when Congress should be helping homeowners.

“This ship largely sailed when Congressional Republicans left it out of the stimulus package,” said one House Democratic aide, who spoke on condition of anonymity so as not to interfere with negotiations.

Unlike the Senate bill, which includes a tax credit of up to $7,500 for purchasers of foreclosed properties, Mr. Rangel’s bill provides a credit for all first-time home buyers — a move that drew strong support from the National Association of Realtors.

“This is a meaningful incentive that should draw into the market many purchasers who, to date, have remained on the sidelines,” the president of the group, Richard F. Gaylord, wrote. “We believe this credit can convert ‘lookers’ into first-time home buyers.”

Other industry groups were also eager to sign on as supporters of Mr. Rangel’s bill, even as many of them hope to push him to endorse a more expansive menu of tax breaks that will benefit them.