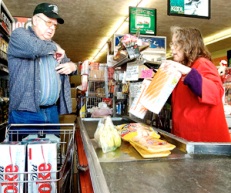 (AXcess News) – Gas pumps in the United States tell the same story as rice prices in Thailand: Inflation is a global phenomenon this year.

Oil hit a record $112 per barrel this week, and a United Nations official warned of continued pressure on food prices, which by one index are up 45 percent in the past year.

The challenges are worst in developing nations, where raw materials account for a larger share of consumer spending. But another factor – the sagging value of the US dollar – means that imports cost more in America and other nations that peg their currencies to the dollar.

Still, regardless of this currency phenomenon, several broad forces are pushing prices up.

After years of strong global economic growth, prices of oil, grains, and some metals have spiked. Investors are adding fuel to that fire by buying up hard assets like commodities, which are viewed as a hedge against inflation.

More fundamentally, many nations have been relatively loose in the creation of money supply. For all the news about interest-rate cuts by the Federal Reserve, this trend goes well beyond US shores.

“We got to the higher inflation rates we have today versus a few years ago because monetary policy in general has not been real restrictive,” says Jay Bryson, global economist at Wachovia Corp., a bank and investment firm in Charlotte, N.C. “At the end of the day the central banks of the world were running relatively loose policies.”

That creates a tug-of-war for policymakers now, because the world’s largest economy is slowing down and may be entering a recession. The question in the US, and some other advanced economies, is whether to focus on stimulating growth or fighting inflation – which typically require opposite policies.

In its “World Economic Outlook” report issued Wednesday, the International Monetary Fund warned of a sharp slowdown in global economic growth this year, with America in recession.

IMF economists see global growth of 3.7 percent this year, much lower than the 4.8 percent they had forecast last October. At the same time, the report warned of rising inflation pressures.

The Federal Reserve has been easing cutting short-term interest rates to stimulate a recovery. And the Bank of England cut its interest rate Thursday.

Most economists say the Fed’s moves are appropriate. But they also point to the possible need for concerted action by the world’s central banks to fight inflation once the US economy has been stabilized.

“The near term worry here is probably too-slow global growth” in the next few quarters, Mr. Bryson says. “But if a US recession proves to be fairly mild in depth, “then the bigger worry may go back towards inflation.”

Still, for consumers worldwide, the price pressures are a very present and urgent concern. As of this week, Americans are paying a record $3.36 per gallon for gasoline, the American Automobile Association reported.

Skyrocketing food prices, meanwhile, have sparked panic and hoarding of grain in some nations. India has restricted rice exports. Indonesia and several African nations are experiencing unrest over food and fuel prices, the UN Food and Agriculture Organization says.

“There is a risk that this unrest will spread in countries where 50 to 60 percent of income goes to food,” said Jacques Diouf, the FAO’s director general, on Wednesday according to a Reuters report. “We have seen riots in Egypt, Cameroon, Haiti, and Burkina Faso.”

The erosion of purchasing power worldwide seems to some extent surprising, given the weakening of economic growth. Often, a cooling economy would relieve pressure on commodity prices.

But inflationary pressures often take time to abate. And today, a majority of the world’s economic growth is occurring in developing nations such as China, where hunger for raw materials continues unfazed by the US slowdown.

Some economists say that upward pressure on commodity prices should cool this year, especially due to ripple effects from a US recession. But others aren’t sure.

“The [economic] surprise of 2008 so far has been the upside surge in inflation, not the downside cut to growth,” a team of economists at Merrill Lynch wrote in a March 26 report. “The current global economic expansion will come to an end when emerging market central banks decide to deal with this threat more aggressively.”

In theory, prices for given products can move up or down without sparking the broader phenomenon of inflation – defined as a rise in the overall price level.For instance, prices for homes and many electronic goods are falling in the US, even as fuel and food costs rise.

But commodity pressures grab headlines, and can effect self-fulfilling expectations that affect the behavior of businesses and consumers.

Moreover, whether it’s called inflation or a price shock, the cost of energy and food could remain under upward pressure now because of supply constraints. It’s getting harder for nations to find low-cost oil supplies, and grains are now in demand as auto fuels as well as food.

“The world economy is in a very difficult position, and policymakers do need to be concerned about both [inflation and growth],” says Charles McMillion, an economist at MBG Information Services in Washington.

A key fuel of overall inflation is money supply, and central banks around the world appear to have tilted in recent years toward providing plenty of it.

Moreover, the Merrill Lynch report shows overall money supply growth ratcheting upward in the past year, led by nations other than the US.

Brian Bethune, an economist at Global Insight in Lexington, Mass., predicts that a negative trend – a weakening in the world economy this year – will ultimately dampen commodity prices. “We’re going to get into a zone where everything is going to be weak together.”

By Mark Trumbull
Staff writer of The Christian Science Monitor