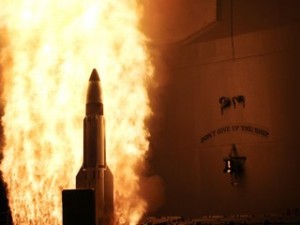 Any such space project would be a boon for U.S. missile-defense contractors such as Boeing Co, Lockheed Martin Corp, Northrop Grumman Corp, Raytheon Co and Orbital Sciences Corp.

“I think it’s very prudent that out of a $9.3 billion request (for the Missile Defense Agency in the 2009 budget year), that we allocate at least $10 million to maintaining our options with respect to the future,” Obering said at an April 1 hearing of the Senate Armed Forces strategic forces subcommittee.

“And that future — in terms of flexibility, of not knowing which axis the threat may come from — is in space,” Obering said.

A space-based missile-defense layer could involve some 1,000 orbiting interceptors at an estimated cost of $16.4 billion, according to a 2006 report by leading missile-defense advocates who call themselves the Independent Working Group.

Critics such as Philip Coyle, the Pentagon’s top weapons tester under former President Bill Clinton, has said putting such interceptors in space would probably cost some $40 billion.

At a space symposium in Colorado Springs, Sen. Wayne Allard, a Colorado Republican on the Senate Appropriations Committee, said Tuesday that the time had come to start the project despite the big price tag and long-standing opposition from China, Russia and others.

“A layer of space-based interceptors would enable a global on-call missile defense capability that could produce a timely response to rapidly evolving situations and would enable the U.S. to be prepared for all types of threats that could develop out of unpredictable locations,” he told the symposium, which drew more than 7,000 rocket scientists, corporate executives, military officers and others.

The Bush administration says its $10 million request is for a space-based “test bed” to start “concept analysis in preparation for certain small-scale experiments,” according to Sen. Jeff Sessions. The Alabama Republican, who backs the funding, is on the Armed Services panel.

Asked about this at the space conference, Roger Krone, president of the Boeing business unit that manages the core ground-based missile-defense system, told Reuters: “If that’s what the customer wants, we’ll be happy to write a proposal.”

Sen. Jon Kyle, an Arizona Republican who is another prominent booster of space-based interceptors, dismissed critics’ contentions that the project would cross a threshold by putting weapons in space for the first time.

In using a ground-based ballistic missile to shoot apart one of its satellites in polar orbit in January 2007, China had already joined in “weaponizing” space, Kyle told an American Foreign Policy Council seminar on March 10.

“By the way, it was a weapon that traveled through space to hit its target then,” he said. He added that the U.S. destruction of a crippled satellite bearing an unused supply of deadly propellant in February “would classify as the same weaponization of space, if that is the issue.”