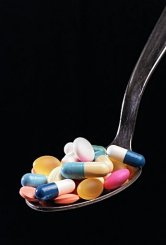 Both medications are common currency on college campuses, used as “study aids” to sharpen performance and wakefulness.

“It doesn’t seem to be causing too much trouble since most [students] use the drugs not to get high but to function better,” Brian Doyle, a clinical pyschiatrist at Georgetown University Medical Centre, told a US newspaper last month. “When exams are over, they go back to normal and stop abusing the drugs.”

Other experts expressed more concern about what the survey revealed.

“It alerted us to the fact that scientists, like others, are looking for short cuts,” Wilson Compton, director of epidemiology and prevention research at the US National Institute for Drug Abuse (NIDA), told AFP.

Ritalin, he noted, can become addictive, even if it has proven safe and effective when taken as prescribed.

The third class of drugs included in the survey was beta blockers, prescribed for cardiac arrhythmia and popular among performers due to its anti-anxiety effect.

Of the 288 scientists who said that had taken one or more of these drugs outside of a medical context, three-fifths had used Ritalin, and nearly half Provigil. Only 15 percent were fans of beta blockers.

More than a third procured their meds via the Internet, with the rest buying them in pharmacy.

Other reasons cited for popping pills were focusing on a specific task, and counteracting jet lag.

Almost 70 percent of 1,258 respondents who answered the question said they would be willing to risk mild side effects in order to “boost your brain power” by taking cognitive-enhancing drugs.

Half of the drug-takers reported such effects, including headaches, jitteriness, anxiety and sleeplessness.

Wilson of the NIDA expressed surprise at the rate of substance abuse shown, but cautioned that the survey did not meet rigorous scientific standards.

“This is a volunteer poll of people responding to an Internet survey. There might be an over-representation,” he said.

But previous research has shown that, as the boundary between treating illness and enhancing wellbeing continues to blur, taking performance-boosting products continues to gain in cultural acceptance.

“Like the rise in cosmetic surgery, use of cognitive enhancers is likely to increase as bioethical and psychological concerns are overcome,” opined Nature in a commentary.

In the survey, 80 percent of all the scientists — even those who did not use these drugs — defended the right of “healthy humans” to take them as work boosters, and more than half said their use should not be restricted, even for university entrance exams.

More than 57 percent of the respondents were 35 years old or younger.