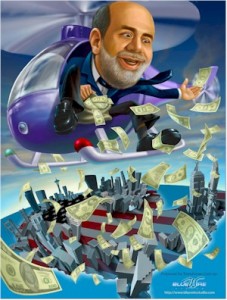 “Never before in our nation’s history has the government spent more money to mint and issue a coin than the coin’s legal tender value,” he claimed in testimony at a recent hearing before the House Financial Services Committee’s panel on monetary policy. But the U.S. mint continues to issue 1-ounce Gold Eagle coins currently worth about 18 times their $50 legal tender value.

The beginning of the end for money “as sound as a dollar” was the creation of the Federal Reserve less than a century ago. The final blow came during the Nixon administration when our money’s last tie to anything of intrinsic worth was severed with the decree that even Silver Certificate currency would no long be redeemable in specie.

Why would Bernanke, Moy, et al., want to degrade our money? Who benefits?

The answer is: those who are at the head of the line. Creating an additional $270 million in U.S. currency to give JP Morgan Chase provided that company the means to acquire Bear Stearns. Then the owners of Bear Stearns spend the money on something else, albeit at slightly reduced purchasing-power value.

The effects will continue to ripple outward, gradually diminishing. The amount of goods and services that can be bought with that $270 million must inevitably decline until the nominal value of the currency reaches equilibrium with the actual wealth available in the economy to purchase.

And who will pay? You will — in the future when you go to draw out the money you put into your 401(k) in today’s dollars. Your investment won’t be worth as much as it should.

What is amazing is that the public has acquiesced in this money-debasing. It ought to be self-evident that it is impossible to create wealth by making entries in a computer.

One Nevada businessman may have found a way to bring the system crashing down — he has begun paying employees in those $50 Gold Eagle coins, making their annual salaries well below the threshold for even having to file tax returns. So far, the IRS is helpless to stop it.