The government continues their on going agenda to destroy the Constitution and everything that the United States used to stand for. A new report from NBC 4 out of Washington DC covers how police are now asking residents to submit to voluntary home searches in exchange for amnesty under the DC gun ban. Of course, like every other tyrannical program being implemented by this criminal government, the police are claiming that this is for everyone’s safety. It is pretty clear that this is part of a larger national program to socially engineer the people for mass gun searches and gun confiscation. The Boston Globe reported that the police were conducting the same type of voluntary gun search program a few months ago. Then there’s the infamous Knock and Talk program in which police officers go around on fishing expeditions attempting to trick their way into people’s homes. Lastly, how can anyone forget about the gun grabbing in New Orleans after Hurricane Katrina? The bottom line is that this type of activity is unconstitutional and the police that are participating in these programs should be put in prison. 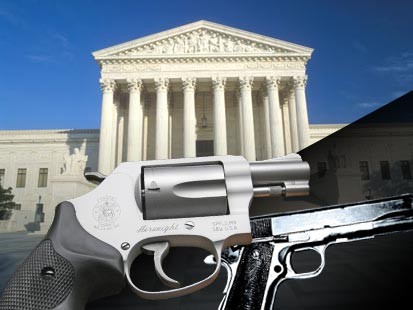 From the NBC 4 report.

Police are asking residents to submit to voluntary searches in exchange for amnesty under the District’s gun ban. They passed out fliers requesting cooperation on Monday. The program will begin in a couple of weeks in the Washington Highlands neighborhood of southeast Washington and will later expand to other neighborhoods. Officers will go door to door asking residents for permission to search their homes.

Police Chief Cathy L. Lanier said the “safe homes initiative” is aimed at residents who want to cooperate with police. She gave the example of parents or grandparents who know or suspect their children have guns in the home.

The whole notion of amnesty is ridiculous because if you have several bags of cocaine in your house or dead bodies in your freezer and the police search your home under this so called “safe homes initiative” they aren’t going to give you amnesty. Police don’t even have the power to give amnesty. The whole thing is a giant fraud. What’s really sick about this whole thing is that from a historical standpoint, true criminality is carried out by governments. For example, the U.S. government deals all the drugs and they have been responsible for the deaths of millions of people. Considering the historical precedent, police and government officials should be the ones searched under this safety initiative, not the people.

As indicated earlier, this type of activity is part of a larger program designed to disarm and enslave the American people. In addition to the aforementioned stories, police have implemented programs around the country giving cash for guns and even gift cards for guns. This has nothing to do with public safety. Instead, it has everything to do with disarming the American people because they want Americans to be a group of disarmed slaves so police in Darthvader outfits can run around ruling over us.

This country is descending into the depths of the New World Order technological police state at a more rapid pace than ever before. This program being implemented by the DC police is nothing more than a giant gun grabbing expedition in which police are trying to trick people into allowing them to conduct searches without a warrant. The gun ban that they are enforcing is entirely unconstitutional to begin with which further compounds the problem. These types of programs are anti-American and anybody participating in carrying out these unconstitutional programs should be put in jail. Perhaps, the DC Police Chief wouldn’t mind if her home was searched. After all, it is all for the public good. Remember, the government loves you and they want to make sure your home is safe.