The world faces a future of “water wars”, unless action is taken to prevent international water shortages and sanitation issues escalating into conflicts, according to Gareth Thomas, the International Development minister.The minister’s warning came as a coalition of 27 international charities marked World Water Day, by writing to Gordon Brown demanding action to give fresh water to 1.1 billion people with poor supplies. “If we do not act, the reality is that water supplies may become the subject of international conflict in the years ahead,” said Mr Thomas. “We need to invest now to prevent us having to pay that price in the future.”

His department warned that two-thirds of the world’s population will live in water-stressed countries by 2025. The stark prediction comes after the Prime Minister said in his national security strategy that pressure on water was one of the factors that could help countries “tip into instability, state failure or conflict”. 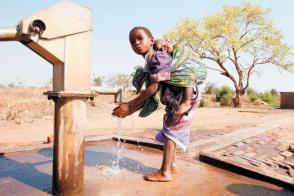 The coalition of charities has appealed for a global effort to bring running water to the developing world and supply sanitation to a further 2.6 billion people. It said international action was needed to prevent competition for water destabilising communities and escalating into conflicts.

In their letter, the campaigners say: “Tackling the water and sanitation crisis is essential if the ‘Millennium Development Goal Call to Action’ is to be a success, otherwise progress on health, education and environmental sustainability will be undermined. Each year 443 million school days are lost globally to diarrhoea and 1.8 million children die unnecessarily from these diseases.

“Investing in sanitation and water brings the greatest public health gains of any single development intervention and delivers huge economic returns. The G8 would do well to heed the development history of east Asian countries that put tackling these issues at the forefront of their national development efforts.”

Ministers agree the world needs to take urgent action to avoid missing Millennium Development Goals to halve the proportion of people without access to safe drinking water by 2015. That target should be met, although progress has been limited in sub-Saharan Africa.

Mr Brown’s security strategy said “rising temperatures together with extreme weather will increase pressures on water supplies”. It went on: “A growing and increasingly urbanised global population will increase demand for food and water, at the same time as climate change and other trends put greater pressure on their supply.

“Already well over 1 billion people suffer from water shortages and 30 countries get more than a third of their water from outside their borders. With climate change, those figures are likely to grow, increasing the possibility of disputes.”

Charlie Kronick, senior climate adviser at Greenpeace, said the whole of sub-Saharan Africa, most of south Asia and western South America were at risk of water shortages if global warming continues.

“There is no doubt that climate change is going to be potentially the biggest source of water stress,” he said. “If average global temperatures go more than two degrees above pre-industrial levels you are looking at 2 to 3 billion people potentially suffering water shortages. It’s a pretty serious business.”