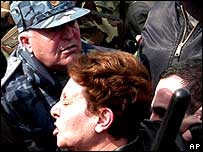 Mr Ter-Petrosian says he is under house arrest.

International observers judged the poll in the ex-Soviet Caucasus republic to be generally democratic.

The latest clashes erupted after police cleared Freedom Square of opposition demonstrators who had been camping there since the election. At least 31 people were wounded in the morning stand-off.

Regrouping later, they used buses as barricades. Some cars were set on fire.

Lines of police were deployed to face the protesters.

A witness told Reuters news agency police had fired in the air “to scare us”.
They have fired tear gas. But people are standing firm. There are thousands of people standing here with us.”

Some unconfirmed reports said a number of people had been injured as police fired in the air. It was not clear how the injuries were sustained.

Alan, a development consultant in Yerevan, heard a lot of gunfire from his home close to Freedom Square.

“After the shooting, we heard a lot of shouting and saw people running from the scene. We could see red tracer bullet fire being shot in two directions,” he told the BBC.

Lori, who lives in the centre of Yerevan, saw a line of tanks roll down her street shortly before the violence erupted.

“About 30 minutes later I saw a flash from my window and then we heard a boom sound,” she said.

“We heard shooting and saw red tracer bullets firing in our direction. The shooting was constant and very heavy for more than an hour.”

But President Kocharian told a late evening news conference that some of the demonstrators were armed and that police said they had been shot at.

“What’s going on now is not a political process. It has gone over the edge,” he said.

“I appeal to the people of Armenia to show restraint and understanding.”

The state of emergency is to remain in force until 20 March, the presidential decree says. Witnesses say they have seen army lorries carrying soldiers on the main road heading towards the Armenian capital.

The opposition has said it will continue with the protests.

Official results gave Mr Sarkisian 53% of the vote, with Mr Ter-Petrosian, a former president, getting 21.5%.