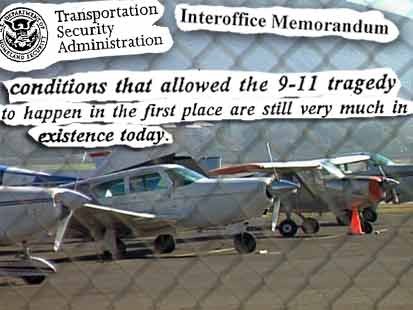 Thousands of foreign student pilots have been able to enroll and obtain pilot licenses from U.S. flight schools, despite tough laws passed in the wake of the 9/ll attacks, according to internal government documents obtained by ABC News.

“Some of the very same conditions that allowed the 9-11 tragedy to happen in the first place are still very much in existence today,” wrote one regional security official to his boss at the TSA, the Transportation Security Administration.

“Thousands of aliens, some of whom may very well pose a threat to this country, are taking flight lessons, being granted FAA certifications and are flying planes,” wrote the TSA official, Richard A. Horn, in 2005, complaining that the students did not have the proper visas.

Under the new laws, American flight schools are only supposed to provide pilot training to foreign students who have been given a background check by the TSA and have a specific type of visa.

But in thousands of cases that has not happened, according to the documents and current and former government officials involved in the program.

McNease, who retired last year, says in one year alone, 2005, he found some 8,000 foreign students in the FAA database who got their pilot licenses without ever being approved by the TSA.

“And a flight school wants the money to teach ’em. And they are gonna teach ’em how to fly and get their ratings, and then they just slip through the cracks,” McNease said.

In another internal e-mail obtained by ABC News, Monty Thompson, an official in the TSA Flight School Inspections section, complained in 2005 to his bosses in Washington, “I fear we are ‘danger close’ to losing sight of the mission and the intent of the ‘Flight School Security’ provisions.”

The new laws were passed after it was learned that all of the 9/ll hijackers, including ringleader Mohammed Atta, who were involved in flight operations had trained at U.S. flight schools with improper visas.

The FAA and Homeland Security are now starting to crack down on a number of flight schools suspected of training students illegally.

Just last month, agents raided a flight school outside San Diego, Anglo-American Aviation International, as part of an investigation of alleged fraud and misuse of visas.

A lawyer for the school said the raid only involved a technical, paper-work issue and that the school was “cooperating” in the investigation.

But federal officials say the so-called paper-work is extremely important.

“What happened in 9/ll we don’t want to happen again or anything like that so something has to be done,” said McNease.

No one from the TSA or Homeland Security would agree to be interviewed for this story, but officials said they were preparing an official statement in response.

The Department of Homeland Security would not provide an official from the flight school program to be interviewed for this story.

In a statement, the DHS said, “We have a high degree of confidence that our layered security measures, both seen and unseen, have raised the level of security in our aviation sector.”

The statement did not address the issue of the thousands of students who have received pilot training and licenses with improper visas, other than to say they “are only one of the multiple layers of security” that the government relies on to “ensure that foreign nationals approved for flight training do not pose a threat to U.S. aviation security.” The DHS said it conducts security threat assessments “on all non-U.S. citizens seeking flight training.”

Eric Longabardi is a freelance journalist based in Los Angeles who is a frequent contributor to the Blotter on ABCNews.com.